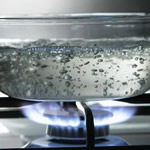 Science is a very straightforward subject because it is based on facts, not opinions. At the Primary School level, this is a double-edged sword— because there’s only one answer, you are not able to argue your thesis, like you could for a humanities subject.  There are some concepts that may prove to be confusing and hinder your path to excellence. However, with the correct understanding and interpretation, it is easy to get an A* for Science.

After much interaction with students, teachers and viewing forum comments on Kiasuparents.com, I noticed five common mistakes. The following questions are often seen in school’s tests and the PSLE.

When water is heated to 100 degree C, bubbles can be seen rising through the water. What do these bubbles contain?

Misconception: “(3) Air dissolved in the water.”

Although bubbles in boiling water contain some air that has been dissolved, most of the gas in the bubbles is water vapour, so (1) is the best answer among the four.

When water begins to heat up, bubbles that form on the side of the pot do consist of air that were dissolved in the water. This is because the solubility of gases decreases with increasing temperature of the water.

As the temperature gets hotter, more water molecules move into the air spaces of the bubbles. This is because the vapour pressure of the water increases, so the bubbles contain more water vapour.

When the water boils, the temperature of the water stays at 100 degrees. The water temperature does not increase anymore because the evaporating water absorbs heat energy.

Evaporation of water at 0 degrees

Question: Does water only evaporate at 0-100degrees Celsius?

Misconception: Water only evaporates between 0-100 degrees Celsius. Water does not evaporate below 0 degrees.

Correct: Water continues to evaporate below 0 degrees, although the process of water escaping into the gaseous state from solid state is known as “sublimation.” 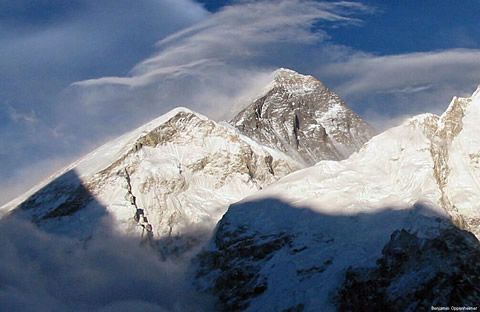 Sublimation of ice on the top of Mount Everest

Sublimation is the transition of a substance directly from the solid to the gas phase without passing through an intermediate liquid phase.

Water molecules can change into the gaseous state, leaving the surface of ice without first becoming water. Even though they are frozen, water molecules in ice still continue to vibrate and there will be some that have enough energy to vibrate or escape from the surface of the ice. This is why we tie up the bags of meat or fish in the freezer, for the exposed areas tend to become dry after some time.

Question: A flask of air was placed above another jar containing brown gas. The two containers are separated by a piece of cardboard as shown below. 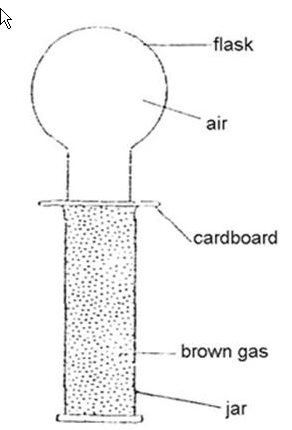 Five minutes after the cardboard was removed a light brown gas was seen in the two containers. 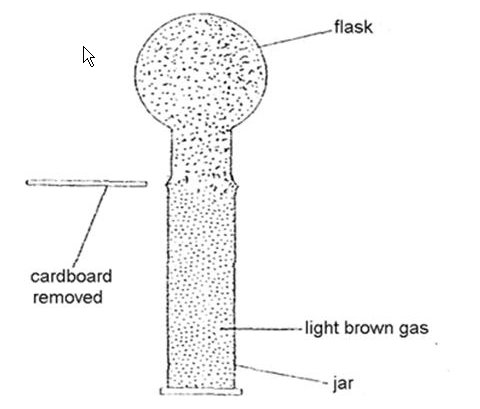 Misconception: The answer key is (3).

Correct: The question above is poorly set. The answer is B only, so 1-4 are not accurate.

The experiment shows that the brown gas can mix with the air. And that it has no definite shape – since it can fit the shape of the flask and the jar. That is, the answer should be B only.

Even if (A) and (C ) may be correct, this is not validated in this experiment. We can substitute the brown gas with brown water and replace the air with colourless water. After some time, we can see the brown liquid has filled both the flask and the jar. Water is not compressible and has a definite volume. So (A) and (C ) are not proven with this experiment.

Misconception: The insect consumes the sugars which were produced with contaminated water as a process of photosynthesis.

Correct: The insecticide coats the leaves of the plant, which the insects eat along with the leaves. 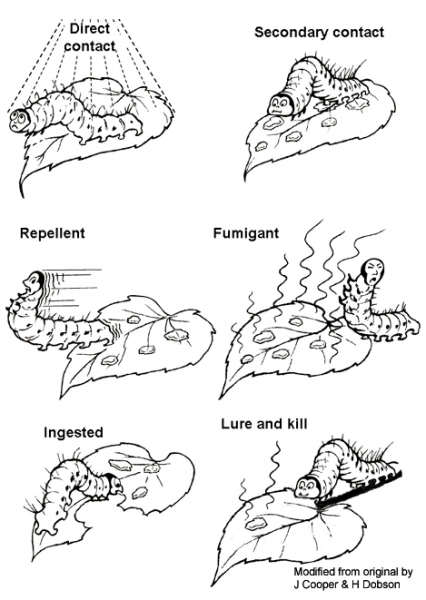 Different modes of action of pesticides

The question is meant to mislead. Do not be tricked by the question. The answer is quite straight-forward. Insecticides kill by coating the leaves of the plant, which the insects ingest.

In photosynthesis, only water molecules and carbon dioxide molecules make the sugars.

Insecticides consist of other molecules that do not get incorporated into the sugars that are produced.

Think about why we wash vegetables and the answer will become clear.

Question: what requires more force – pulling a load up an inclined plane or pulling the same load up vertically?

Wrong: Pulling it up an inclined plane because it needs to overcome gravity and frictional force; lifting it up requires overcoming the gravity only.

Ignoring the effects of friction, pulling the same load up vertically or over an incline results in the same amount of work done (same gravitational potential energy).

Now, we need to add in friction

There are instances of poorly-set examination questions and times when I have encountered teachers providing the wrong answers to students. I hope that this article can clarify some concepts and bring you closer to your A*.

Wallace is a trader who has recently started a Facebook site with his buddy to answer PSLE queries. Like them here http://facebook.com/studyroomjr.

accept that the teacher made a mistake and move on

Agreed. It’s very difficult to question a teacher when you’re a parent. Even harder when you’re a student. When I was a student if I felt like I was wronged, I’d seek second opinions and challenge the teacher. But most times, I’d just accept that the teacher made a mistake and leave it at that.

It’s easier in this age to get the answers – just google. Back in my time, I’d ask my parents and my parents will tell me to read the textbook. -_-“

3Boys, continue to encourage your kids to be inquisitive. And help them google for answers if you doubt the teacher’s answers 🙂

Indeed. It's very tough to

Indeed. It’s very tough to tell my kids that they were right in the interpretation of the questions but the did not get the ‘official’ answer. Teaches them to toe the line unthinkingly.

Yes… I get that a lot too.  The teachers in general are reluctant to go against their official answers, despite the obvious ambiguity of the options.  IMO, Some of the ambiguity borders on frivolity.

Life is hard for our kids who have to go through this.

How do you deal with poorly

How do you deal with poorly set, ambiguous questions, but with teachers sticking to their guns on the ‘correct’ answers? I have faced a few of these over the years, but have yet to be able to overturn any of them.

Help Your Girls To Love STEM: What You Can Do…

How to Master in Chemistry and Score A1

Giving Your Child a HEADSTART in Life