A Mother and Her Daughter 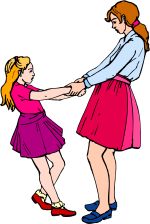 I was at the therapy centre yesterday for one of dd3’s routine sessions, waiting for her. A mother with a down’s daughter came to the waiting area. She was a friend of a mother whose son was also undergoing therapy at the centre, whom I also knew.

The conversation turned to my situation and I gave her a brief outline without going into details. I asked her a few questions about her experience in school placement. She started to share with me on how she got into the mainstream school, and what were the hurdles in between. The Mother shared that she herself only had a P6 education, so she went into her daughter’s class and learnt about the math concepts so that she could go home and teach her daughter. She gave me tips on what to do and what to look out for. There were a few details that I asked that she could not recall, but she said she will check and let me know through our mutual friend.

Throughout the conversation the Mother and daughter expressed considerable affection for each other with hugs and smiles. She said her daughter was lucky.

Time to go and the usual goodbyes. I found myself saying ‘thanks’ to her before she left.

After she left I thought about her, and I was moved to tears. This is a mother who is full of energy and optimism for her daughter. She was clearly proud of her daughter’s achievements. She was beaming with pride but she was not showing off. There is thin line in between, but she carried that off very well.

Here is a fellow stranger who is gracious and unassuming in sharing her life experience with another fellow stranger. She had no inhibitions and fear in telling me as much as she knew, someone that she has only got to know barely minutes before.

She may not have received a high education, but during that brief encounter she has been a teacher to me. I saw in her the things that I have been looking for since a long time ago, and she showed me that it can be done.

It was an inspirational moment for me.

Dear all, once again, thanks for all the encouragement. As buds has pointed out, I am most of the time active at the Autism thread, learning to be strong and adaptable to life’s surprises and challenges.

Thanks for sharing. It is so

Thanks for sharing. It is so touching.

Hi sweetie.. i have read you around the autism thread albeit silently… cos i have contributed there too. I remember one of your very first revelations during initial discovery and you were still in a stage almost every parent of a special needs child goes thru… the why and the how-can-it-be stage. Not everybody understands this stage. It’s a phase of opening up our hearts to the same baby we’ve given birth to but only with a label on him/her.. Not everybody knows this stage and how hard it aches to even think abt it.. Looking at your post today, it is calming to read how you’ve come at peace with the inevitable change that has happened & yet you are not going to give up on your child and most importantly i read you waaaayyy stronger now and i’m sure you are not giving up on yourself that easily too. That sweet baby of yours is still the same baby but with now a stronger mommy….. seeking all the opportunities out there as far as she can go. *long big hugs* from buds. You take care now… kiss the little angel for me.

You must have gone trough some tough stretches yourself… Happy to read that you have found some real peace of mind..

drop by when you need support.. we’ll always be around..*hugs*

Thank you. what an inspirational start to the morning!

This brought tears to my eyes as i read it. Really wonderful mother!

Thanks for sharing such a sweet piece

Thanks for sharing, IMM. I am very happy to read that you are now more at peace.

Dear All, its a pleasant surprise to see that my post has been chosen for publication. thanks all for the appreciation! 🙂

I have stopped posting for a while due to some personal reasons, but it is really encouraging to know that my post is being appreciated.

i believe in the saying that when you have a special needs child, you meet a different class of people. Perhaps that is how we can learn to truly appreciate the real essence of life.

I am still learning and at times I am beginning to have moments of real peace of mind.

thanks KSP for giving me the opportunity to share and be appreciated! 🙂

Thank you for sharing this

Thank you for sharing!!

Very rare to see these kind of people.I have one bad experience.I asked a mother about the primary school studies.I asked how to prepare them.She asked me are you educated then learn yourself.After that I never ask anyone anything.You are a lucky person and met a lovely and generous mother.

Good sharing! That's what a

Many thanks for sharing this.

All Mothers are 'Wei Da'

Thanks for sharing this experience with us.

Not that daddies are not.. but the bonding between Mothers and Kids are stronger as we carried them with us for nearly 10months before delivering them.. and believe me some mummies went through alot during this pregnancy process.

Thank you for sharing with us.

Once again show the great of all mothers! Kudos to all mummies!

This is a true bond between a mother & daughter, a bond which will never break.

Experiences itself is our teacher; we all learned through experiences & it is a life long journey.

Mother will never give up their child no mather how tough is it!