Submitted by BlurBee
Recently watched a DVD on a seminar about Colorectal cancer conducted by a Taiwan doctor in Yr2005. Colorectal cancer is the 1st cancer affecting Singapore men & the 2nd cancer affecting Singapore women. The doctor mentioned that there is a type of mushroom that is very good in controlling the spreading of cancer cells. That is Agaricus Blazei Murill Mushroom (巴西蘑菇).
What is Agaricus blazei Murill?
Agaricus blazei Murill originates in Piedade, a small village in the Atlantic forest near Sao Paulo, Brazil. In 1960, a Japanese researcher named Takatoshi Furumoto discovered it and sent it to Japan in 1965 for study. Agaricus is well known as a medicinal mushroom, especially in Japan, due to published research indicates Agaricus exhibit anticancer activity, may halt cancer growth, may increase immune cells and make immune cells more powerful. It is also a popular food that has low calorie content and is mineral rich. It contains important fibers, vitamins and amino acids.
In Brazil, they call it Cogumelo do sol or medicinel and in Japan they call is Himematustake, Agarikusutake or Kawarihiratakes. In China, it is known as Ji Song Rong (姬松茸). All over the world people are using this wonderful mushroom for food and health.
In Japan, Agaricus is the most popular complementary and alternative medicine used by cancer patients. According to the Memorial Sloan-Kettering Cancer Center, “There is some proof showing Agaricus extract may benefit patients with certain cancers. But more studies are needed to confirm these observations.”
How cancer cells developed (extracted from http://www.askjanice.com/letters/agaricus.asp)
Disease-causing bacteria and viruses, polluted air, pollen, harmful substances in food additives, and other harmful invaders constantly surround our bodies. Our bodies come equipped with the ability to purge out the invasion of such foreign invaders. Immunity refers to this defensive system that the body contains. Lowered immunity makes the body more susceptible to the invasion of foreign matters and thus, more susceptible to disease. It is easy to catch a cold when physical exhaustion weakens the body because immunity levels become lower with physical tiredness. Immunity lowers with age and dietary changes (high-cholesterol and high-calorie diet, residues of agricultural chemicals, food additives), environmental factors (air pollution, gas exhaust, and electromagnetic waves), and stresses also help to destroy the necessary balance for immunity. To maintain health and prevent the invasion of disease, it is very important for our bodies to keep immunity at an effective level.
Immunity is a system that recognizes and removes alien substances or substances foreign to our normal conditions. In addition to the fore mentioned viruses and other “foreign invaders”, three are also “inner invaders” that the body gives birth to. Our bodies regularly carry out cell division but during gene mutation can produce abnormal or cancer cells. Because cancer cells are very similar to normal cells, it is difficult to recognize them. They easily escape the immunity traps, and it takes time to determine whether the cancer cells have caused disease. Cancer cells do not grow all of a sudden. Starting with a single abnormal cell, it multiplies and takes years until cancer can be detected in an individual. There is always a possibility of cancer cell production every time cell division takes place, but having a normal level of immunity can suppress the increase and spread of cancer cells by destroying them as soon as they are produced. Among the current cancer treatments, immunotherapy, which strengthens the natural immunity functions of our bodies to fight against cancer cells together with other treatments, has shown to be very effective.
Recently, the occurrence of allergic symptoms described as atopic skin rashes, pollen-induced allergies, and asthma has gained much awareness. Allergies occur when a mistaken functioning of the immune system unnecessarily attacks pollen, dust, or its own cells by recognizing them as foreign matters. In the case of AIDS virus, the body becomes unable to defend the body from even slight illnesses that do not normally cause death, since the virus breaks down cells of the immune system. In this manner, diseases that occur from the improper functioning of the immune system are currently on the rise.
Other benefits for Agaricus blazei Murill
Aids Diabetics
Lowers Cholesterol
Stimulates the Immune System
Reduces physical & stress
Prevents Peptic Ulcers & Osteoporosis
Heals Digestive & Circulatory Ailments
巴西蘑菇药效
１）对循环器官系统的作用——高血压、低斑压、心脏病、狭心症、心肌梗塞、血栓症疾病、动脉硬化症、末梢血管收缩症、重症肺炎、败血症、白血病、恶性淋巴瘤、肺癌、强心、强壮、补充体力、半身不遂等。
２）对消化器官系统的作用——十二指肠溃疡、肝肿大、慢性胃炎、胃下垂、胃癌、肝硬化、肝癌、Ｂ型肝炎、腹水癌、大肠癌、直肠癌、乙状结肠癌、病毒性肝炎、慢性口内癌、肠癌、息肉、便秘、食欲减退、长肿疱、痔疮、齿槽脓漏、肾炎、肾不全等。
３）对内分泌系统的作用——糖尿病、高脂血症（高胆固醇症）、过敏、肝炎、浮肿、肝障碍等。
４）对脑神经代谢系统的作用——糖尿病、多发性关节风湿、慢性关节风湿、自律神经失调症、神经衰弱、日本脑炎等。
５) 对呼吸器官系统的作用——慢性支气管、炎气喘等。
６）对生殖器官系统的作用——乳癌、卵巢癌、乳房炎、妇人病、生理不顺、更年期障碍等。
７）对泌尿器官系统的作用——膀胱炎、前列腺肥大、肾病变等。
８）对皮肤系统的作用——香港脚、湿疹、异位性皮肤炎、皮肤肌炎、织毛上皮瘤等。
９）其他作用——净血作用、手脚冰冷症、五十肩、凸眼性甲状腺肿、慢性鼻炎、花粉症、宿醉、腰痛、虚弱体质、胶原病、蓄脓症、德国麻疹性关节炎、齿槽脓漏、肩膀酸痛、眼病、精力减退、流行性感冒等。
Table extracted from http://www.cclw.net/experience/Agaricus%20Blazei%20Murill/Agaricus%20Blazei%20Murill.html 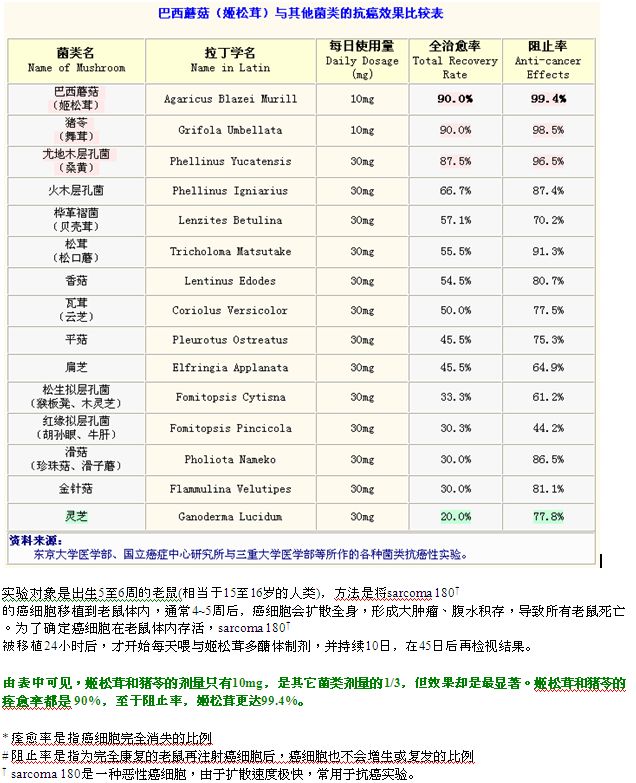 The problem now is — where to buy Agaricus blazei Murill Mushroom in Singapore???????