All About Travelling Pregnant Or With Kids 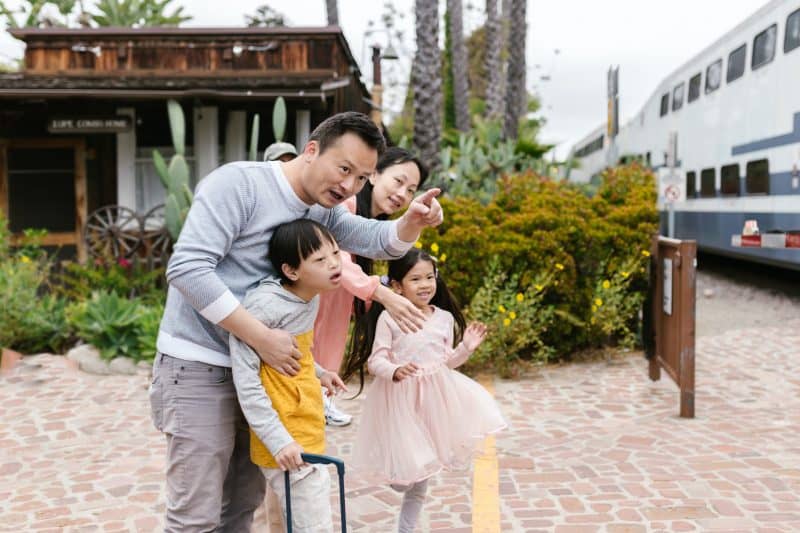 My girls took their first flight at 5 months and 2 months old respectively, and flew several times a year until their teens. So I am extremely experienced!

For a 2.5yo, I would go for a stroller – they are too heavy to carry even in a sling, etc. And there’s a lot of walking in airports. Go for the lightest and most easily folded one you can find, and train your child to stay in it without fussing. The smaller your stroller, the more likely you’ll be able to use it at your destination, especially in Asia. Some of the monster strollers I see around these days will only work in western countries with wide pathways. Some airlines will let you use the stroller right up to the gate, then return it as soon as you disembark (not with the rest of the luggage). But not all are so helpful, so you should ask first. Since you are travelling as a family, let 1 adult watch the child, bring him around to see things etc, while the other does most of the queuing and handling the paperwork.

Don’t give candy! Kids often get hyper with too much sugar, and you really don’t want that on on a long flight, or any flight. But do bring some snacks as your child may not be able to wait for the meal to be served, or may not like what is served. Eating or drinking during take-off and landing also helps equalise the pressure in the ears which makes some kids cry. I used to bring some small sandwiches (with fillings that don’t spoil, and eat those first) and raisins and crackers for my kids – compact and easy to feed.

Bring some small (silent!) toys and books to entertain him, and paper and crayons. Don’t bring anything with separate parts as you are bound to lose some, and don’t bring anything messy. And don’t bring them all out at the same time – offer one at a time, and keep one when you offer the next so they stay “fresh”. Bring some old favourites, and also a couple of new items. If you wrap them up, that buys you time as he will need to unwrap them (but pick up the litter). And after you arrive, put away at least a few out of sight for the flight back! If your child has a “sleep toy” or blanket or whatever, bring that on board (but you may want to get him used to something small and packable before your trip). And don’t lose it!

If you can, try to time the flight for when the child is usually asleep (eg. afternoon or night), but not so late that he will be super-cranky. Exhaust him by letting him walk and play before boarding, and hopefully he will spend most of the flight sleeping. For a child that age, go for a short flight – there are quite a lot of places you can go under 3 hrs.

No, it’s not very relaxing, at least when en route! But holidays build lots of memories (both good and bad, I must confess), but they’re good for recounting to your kids when they are teens and older. Try to make the holiday itself free and easy, with lots of down time and play time, rather than trying to fit in a lot of sightseeing. To make the holiday less stressful, it’s important to inculcate good behaviour in your child at home under normal circumstances – minimising tantrums, reasonable levels of obedience, flexibility about foods, learning that “no” means “no, not wandering away (or use a harness or wrist leash), etc. Then although he will likely act up somewhat when he’s tired or in unfamiliar places, it won’t be too bad. If he’s used to whining and throwing tantrums to get his way, and it works at home, he will likely do it even more when cranky or under stress. And you can’t unbuckle a child during takeoff or landing, no matter how loudly he screams.