As P1 Registration approaches, one recurring issue leaves parents bitterly divided.  Does the current system shut the door on parents trying to get into top schools without the aid of priority accorded by the system?

At the heart of this dispute is whether the current system of assigning priority for P1 registrants too skewed in favor of certain groups.

We have analysed the take-up rate of vacancies in schools from 2006 to 2012, to try to understand how places are snatched up in the various stages by the top 20 schools that we have earlier identified as academic powerhouses amongst Primary schools in Singapore.  This is what we found.

In Phase 1, we find that the top 20 schools (marked in RED) are amongst the top 123 schools with the highest average take-up rate. St. Hilda’s Primary school, one of the top 10 schools in our list, has the highest rate of new students entering the school of about 52% by virtue of their siblings who are currently studying in the school.  However, we note that ACS Primary, another top school in our list, is last at position 123, with only about 27% of its vacancies taken up in this stage.

We also note that in Phase 1, a number of “neighbourhood” schools also have very high take-up rates, under-scoring the confidence that parents have in these schools.  While there is some bias for the top schools in Phase 1, the demand is unevenly spread amongst these top schools.  Perhaps this is because most Singaporean families are small, and so cannot really take advantage of the sibling priority.  Single sex schools such as ACS Primary and Raffles Girls have much lower take up rates in Phase 1 compared to the coed schools in our top 20 list.  Obviously, having a sibling in one of these schools will not provide any advantage if the younger sibling is of the opposite gender.

The situation changes drastically in Phase 2A, when we see the top 20 schools featuring strongly as schools of choice amongst alumni.  They are now amongst the top 46 schools with the highest combined take-up rates in Phase 1 and Phase 2A.  ACS Primary went from position 123 in Phase 1 to the top position with a whopping average of 83% of the places taken up.  As we can see from the next chart, Phase 2A sets the tone for the make up of subsequent Phases. 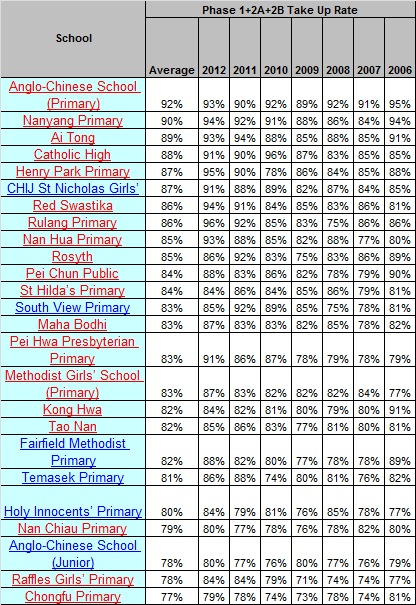 By the end of Phase 2B, the trend becomes very obviously skewed in favour of the top 20 schools.  They are now amongst the top 25 schools with the highest combined take-up rates in Phases 1 to 2B.  Even so, we note that the trend is mainly set during Phase 2A, and Phase 2B only underscores this trend.

What is significant is that less than 25% of vacancies in these top schools are left for parents waiting in Phase 2C.  In the case of ACS Primary, there is usually less than 10% of places left for such parents, and in 2006, there were only 5%!

While one might argue that this is a natural reflection of parent’s interest in schools with good academic records, there is also merit to claims that the current system of according unfettered priority to alumni of these schools can lock out parents without such ties.  Unlike Phase 2B, there is currently no limit on the number of places that can be taken up by qualifying parents in Phase 2A. So it is possible that the school may have no places left for parents in Phase 2B or later phases.

The data clearly shows that Phase 2A does play a significant role in shaping the highly competitive nature of P1 registration for what parents deem as “top” schools in Singapore.

Instead of questioning the “fairness” of the system or the value that alumni brings to schools, perhaps we should ask ourselves whether top schools can continue performing at their high levels if the majority of new students come from within their own ranks.