Studies have shown how a bilingual education benefits a child’s linguistic development. Besides having an advantage in literacy and language development, being proficient in two languages also equips children with skills to help them succeed in school and in life.

Here are some other skills that a child acquires in addition to the literacy and language development. 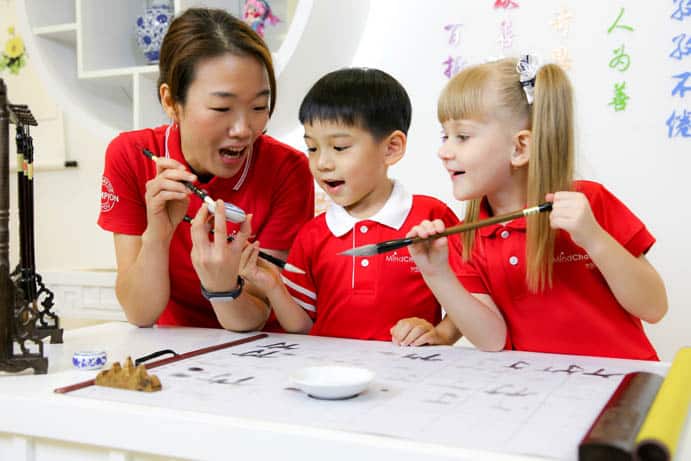 According to scientists, learning Mandarin makes your child smarter, as this trains their cognitive abilities which are not utilised in the study of other languages.

Learning Mandarin helps your child develop their motor skills, learn shapes and letters and the visual identification of graphics, mainly attributed by the complex structure of Chinese characters. The movements required to form Chinese characters are known to help activate neural activities in the working, thinking and spatial memory of the brain.

To effectively raise a bilingual child, it is important to establish a strong foundation in the language right from their formative years.

While majority of preschools in Singapore have catered to the needs of parents by designing curricula that focuses on two languages (i.e. English and Chinese), there is a growing demand for Chinese preschools in recent years.

Between a bilingual preschool and a Chinese preschool, which is a better choice for your child?

Most preschool curricula in Singapore are based on a bilingual education system where the predominant language used is English. Typically, there will be an English teacher and a Chinese teacher assigned to each class. While majority of the lessons are conducted in English, there will be dedicated time slots for Chinese lessons at least once a day.

At some preschools, bilingualism is taken a step further, with certain lessons integrating both English and Chinese – instead of being taught separately. For example, at MindChamps PreSchool, both the English teacher and Chinese teacher for all levels take turns to conduct weekly enrichment programmes such as Gourmet Moments™ in their respective languages. 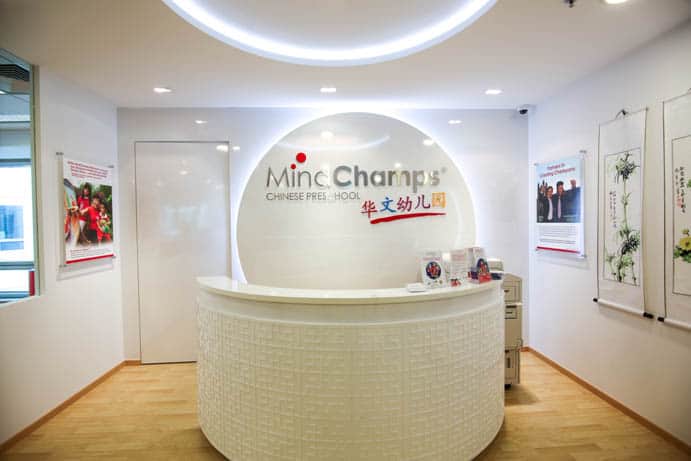 With English overtaking Chinese as the main language spoken at home, many parents are looking for ways to immerse their children in a predominantly Chinese-speaking environment to make up for the lack of exposure at home.

A great option for parents who are considering Chinese preschools for their children is MindChamps Chinese PreSchool, which offers the same unique curriculum based on decades of research as the rest of the MindChamps PreSchool centres. The difference lies in the greater emphasis and immersion on Chinese throughout the teaching and learning process.

Apart from their usual English and Chinese lessons, preschoolers from 18 months to 6 years old enjoy greater exposure and immersion into the language by having selected enrichment programmes conducted fully in Chinese – as opposed to English, which is the case at the rest of the MindChamps PreSchool centres.

This is especially so for the playgroup and nursery 1 classes, so that a strong foundation is established during the early years. From nursery 2 onwards, the use of English increases while still maintaining the teaching and learning of Chinese. This well-balanced environment is designed to prepare children for transition into primary school, where English is used as the main language of instruction.

MindChamps Chinese PreSchool also incorporates the Chinese Culture Appreciation programme, where preschoolers get to learn the rich Chinese culture and history through lessons, as well as arts and cultural appreciation activities such as clay modelling, painting and calligraphy.

“If I send my child to a Chinese preschool, will he or she fall back in English?”

According to the MindChamps Chinese PreSchool team, parents need not worry about this. Although greater emphasis is placed on Chinese for day-to-day learning and communication, there will still be lessons and programmes conducted in English in Chinese preschools. Thus, a child’s command of English will be fine, as he or she will be exposed to both languages.

Instead, attending a Chinese preschool will bring a world of advantages for children in Singapore. By the time they graduate from Chinese preschool, they would have already established a strong foundation in Chinese which will enable them to catch up with the Chinese curriculum in primary school.

Check out this article for more insights on misconceptions some parents may have towards having their children attend Chinese preschools, with facts and explanation by the experts. 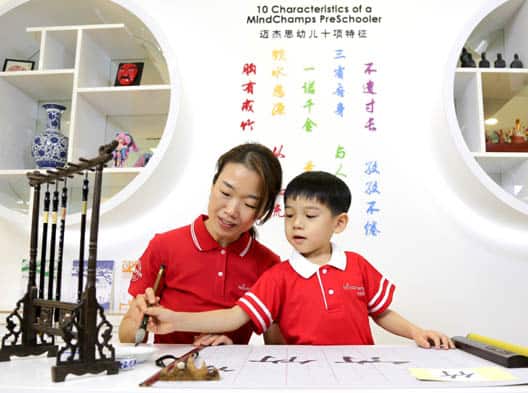 Here’s what other parents have to say about their children’s experience at MindChamps Chinese PreSchool:

“Thanks to the strong Mandarin immersion environment, Alexander has been sprouting more Mandarin at home and happily sings the songs (English and Mandarin) that were taught in school. He would also ask us to read the weekly Chinese and English books. I think the school is integral in cultivating this love for both languages, something that is important and extremely invaluable in any child’s early learning journey.”

Prior to enrolling in MindChamps, I observed Isaac starting to reject Chinese – he was about 2 years old then. When spoken to, he would switch to English or oppose, which was funny but also worrying.

We were concerned initially whether Isaac would feel overwhelmed being thrown into a new environment with a new language.  However, young children adapt quickly and before we knew it, he is acquiring new vocabulary and is responsive when I communicate with him in Mandarin

Since he started attending school at MindChamps Chinese PreSchool @ Thomson, Isaaac knows many words in both Mandarin and English. He can converse with a basic level of understanding and enjoys the songs and stories in both languages.

Kids learn faster than adults and being 50% Chinese, I believe it is essential that Isaac be exposed to the Chinese culture and language early on. This will enable him to tap into the advantages of being capable in the most widely spoken language in the world today.

Chinese is not our native language. However we believe that we should give our boys the opportunity to learn Chinese, given the high and increasing importance of the language.

Initially we were not sure whether the boys can cope with learning Chinese, given that this would be their fourth language in addition to Malay, German and English. Furthermore we are not able to help out so much or correct any mistakes. But after much thought and consideration, we decided to go ahead and expose our boys to this multi-lingual environment.

Looking back, we are glad that we made this decision. Having been with the school for almost two years now, we are very pleased that the boys can understand and speak some of the Chinese words and read characters to us. They have also managed to teach us few words. At the same time, we don’t find that the other languages are really being affected.

If you are looking to enrol your children in preschool next year, now is the perfect time to head down to your preferred MindChamps PreSchool and MindChamps Chinese PreSchool centre to find out more and meet the teachers.

Click here for more details and to book an appointment!