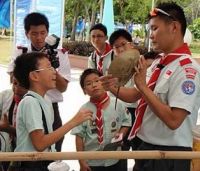 CCAs, like what teachers and other parents have said, build character and if you child does well, may help boost his “portfolio” later on when applying for schs or anything else he wishes to enrol or apply for that may require a reference to CCAs/sch record. For example, if there is a tie, and your son has the better CCA record or even just having a CCA record, may put him in a better light. Of course, we may never find out about this “tie-breaker” since final selection is still done behind closed doors.

Having CCAs will show another side of your son to the teachers. If they have to write letters of recommendation, you have more teachers to turn to to get a well-rounded view of your son. Also, form teachers have to write remarks in the report books semestrally, and finally, a testimonial. Imagine the poor teacher trying to come up with something so that your son will have a substantial write-up, when he does NOT have a CCA and is practically non-existent in class. With a CCA, the teacher will have more to write, especially if your son is a “wallflower” in his/her class but a prominent contributor or promising leader in his CCA (which the teacher can find out easily form the CCA teacher).

Choice of CCA is also crucial. Of course, your son must enjoy and be committed to it. He must also be able to balance schwork, social/family life, CCA, and still have time to rest. Unless he is like phankao’s son, who knows the importance of balance and can make the decision himself later on, you may have to step in if you think your son cannot do that on his own. Or worse, he may think that withdrawal from CCA due to inability to balance is equivalent to failure.

If he chose a club kind of CCA rather than a uniformed group or performing arts group, he may have more free time but there is a chance that he may become a sleeping member. In this case, he might as well not have a CCA cos he’s just wasting his time; he learns nothing and gains minimal points.

If he chose an uniformed group, it can be rather intensive but since these are popular among children (not sure about pri sch but very popular in sec sch, don’t know why though), he may have to work hard to be “promoted” through the ranks in order to be noticed and gain more points.

Since he chose a performing arts groups, he won’t have to work as hard as if he were in an uniformed group. This is cos everyone has a part to play. Everyone must play an instrument, act a role on stage, help backstage, dance, etc. No one can be a sleeping member in such groups and get away with it. Sleeping members are not tolerated in such groups, unlike in clubs, strangely. In this way, he has more opportunities to show his skills and talents, not just in music alone, and he may even get more points.

Do bear in mind that since performing groups need to perform, when performance or competition dates approach, be prepared for your son to have extra practices or extended practices. This is part and parcel of life in a performing group, amateur or professional. Even the instructors and teachers must put in extra hours.

If you are worried about his meals, and can’t bring him lunches ins ch, do what I do for my DD sometimes. When she is sick of canteen food, she will request that I cook. I will cook simple meals that can be eaten quickly and without mess, and will not spoil easily. I just cook the weekend before and refrigerate or freeze it. Thaw the night before and re-heat the next morning. Let it cool a little, then pack it into her bag. Since you prepare the meals, you can ensure that he eats properly.

My DD is in P1 now and she was actually very keen on having a CCA, though I think they don’t accept P1 kids. The reasons why she gave up for now is cos she can’t decide on one yet and she said that she wasn’t ready to be on her own after sch, even when she knows that the BASC teacher will pick her up after CCA ends. I’ll just wait till she’s a bit older before asking her again.

No CCA points in Primary School

No; at the moment there is no particular point system for CCA involvement in primary schools.

The Benefits of CCAs

Participation in CCAs not only open up the opportunity for a pupil to gain certain knowledge that isn’t obtainable from the classroom, but it also enables the pupil to acquire life skills like interpersonal communication skills and team work, and in the process, sharpens the pupil’s EQ (Emotional Intelligence), which will stand him or her in good stead when he or she enters the work force in the future to come.

The importance of CCAs

In fact, i think CCAs is useful for the whole educational ladder. It is good for character building, it gives them the skills that will prepare them for the workplace in future. It gives them a wider network of friends.

Just to tell you a strange thing. My niece was applying for medical school in UK. And one of the criteria they ask for is the candidate needs to play a musical instruments.

Getting Transferable Skills from CCAs

I think getting involved in CCAs is beneficial for a child. She/he gets to learn skills like leadership, interpersonal skills, project management skills etc. The true rewards is also gaining more friends, which can enrich your children’s life and network when they grow older.

CCAs: See It As a Long-Term Goal

As a career counsellor and ex-corporate recruiter from US MNCs, CCAs are important. But parents need to remember that just because a child did a particular CCA coupled with strong grades and still did not get into a choice school; they should not get upset about it. The soft-skills garnered in CCA will serve very well in later life. For example, I find that generally those who are school sports captains or a chairman of a school club or leader in a uniformed group usually turn out to be very good-people managers when they are in their 30s and 40s; which means they are more likely to be promoted and do well in their careers.

Parents need to see CCAs (in schools or external) as a long-term investment. Hate using that word “investment”! 🙂

will cca points be considered during PSLE exam? If yes, the points considered is that of P6 or cumulative from P1?

Do the student gain point in CCA for primary school?

What CCAs do they offer in Primary?

Dear all, am new to Singapore’s Primary schools and my daughter will start her P in 2012. May I know sample of CCAs being offered in Primary? do they have to choose it when there’s in P1 or at later stage (i.e., P3)? thanks a lot for input in advance!

I always wanted my children to select sport for their CCA. All the sport CCA has to go thru the selection round and my children did not get into any, thus has only choice is club. Very upset.

Thanks for your insight

Thanks for your insight into CCAs. I’d always considered dd’s choce in drama a cop-out as so far, she only gets small and insignificant roles in performances.  After reading your article, I realise that we’re lucky – at least she is not a sleeping member, lol.

Thanks for sharing. It will

Thanks for sharing. It will come in handy when my girl is p3.

I had the misfortune of

I had the misfortune of learning that CCAs matter only later in life cos I belonged to the era when CCAs were just seen as ECAs, just an extra thing. If have, okay. If don’t have, also okay. I didn’t enjoy my CCAs in sec sch and JC much except that it taught me teamwork and kept me fit. I guess it was becos my schs insisted on us having a CCA each. Only in NUS did I actively choose 2 out of interest, and voluntarily, since I didn’t stay in the hostel/dorm. I can say that having leadership positions in CCAs help a lot when I was job-hunting.

I agree that community service counts as much as CCA, especially since it is voluntary. However, I will find it strange if the student doesn’t have a CCA, and yet is active in community service. After all, the sch is part of his/her community life for a few years and being actively involved in a CCA there shows that the student cares about his/her sch too. It also kind of implies that this student will be able to adapt and contribute to his/her future workplace community, besides contributing to society via community service.

As for my DD, I only want her to choose something that she will enjoy and hope that she learns not only the skills that CCA can teach but also other skills like teamwork, adaptability, time management, resilience, etc.

I have the opportunity to sit on a few interview panels while recruiting for our staff, and yes, CCAs do come in as one of the deciding factors, especially if the candidate is able to show that he/she has contributed or participated actively.  Comparing 2 candidates with similar grades in their academic performance, his/her involvement in CCAs will certainly be an added advantage.  But we also look beyond schools’ CCAs.  Some participate in community organisations (eg as volunteers) after they leave school, which could also be considered favourably.

And from what I understand from friends whose kids went through a challenging time selected (or be selected for) CCAs in their secondary schools, it seems you have to get your kids ready since primary school.  Heard that some secondary schools select students into certain CCAs as they were in the school team in pri schools.  Some may not even provide selection trials (eg for sports) for those who are keen to give it a shot (but was not in school teams before).

Choosing The “Right” CCA: Should You Have A Strategy?

Primary Schools To Have More Space, Time for CCAs