Dealing With Anger In Children: A Counsellor’s Perspective

As a mother of two, I’ve often summed up the difference between parenting a preschooler and parenting a preteen in this way: A younger child is physically taxing, while an older child is emotionally challenging. Pre-teens (and I would presume, teenagers) are especially tricky because they’ve gained some autonomy and are beginning to assert themselves, yet they still need the affection, patience, and tolerance that one might accord to a younger child.

Last month, my daughter’s primary school hosted a seminar on helping children to manage anger. The guest speaker was family life educator Richard Cheong, who specialises in counselling married couples as well as children and teens. He opened the session by telling parents to remember that anger is a natural human response to frustration or a perceived threat. It is not wrong to feel angry, he said, however, how one chooses to manifest one’s anger can affect his or her quality of life and relationships in the long run.

“Emotions do get the better of us,” said Richard. “When you acknowledge your child’s negative emotions without judgement, it could help your child to cool down, as well as build a bridge between parent and child.”

Within the realm of family life, battles are typically waged over safety issues, moral values, convention or tradition, and personal preferences. “Set rules for your children, but not too many. Even the Christian bible only lists 10 commandments,” quipped Richard. “Have you heard the saying, ’Strict parents groom smart liars?’”

Parents can avoid confusion and needless conflict by picking the “right” battles, and a healthier approach would involve adopting a firm stance on priority issues such as those concerning safety and family values, while leaving room for negotiation and compromise in other areas.

Richard also highlighted a common misconception that all conflicts must be resolved by the end of the day—there are times when putting a tense situation on hold may be the most practical thing to do, as sleep should take precedence, and it is likely to aid recovery. Another mistake is trying to help children find solutions to their problems while their emotions are running high—adults will know from experience that no resolution can be reached with an angry party. 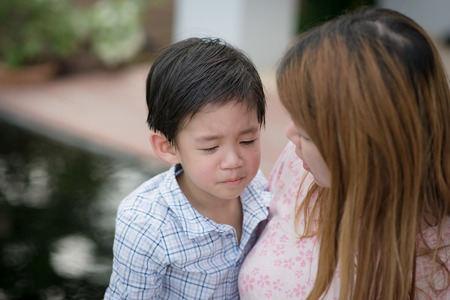 If your child is worked up, here are some steps you can take: Identify your child’s emotion, give voice to it, and encourage your child to take some quiet time to simmer down, with the knowledge that you are nearby and ready to talk once he or she is calm. When your child is ready for a discussion, questions you can ask include “Tell me more about what happened?” and “What triggered your anger?”

If the situation should escalate and your child resorts to violent behaviour, you will need to tell your child to stop. If the behaviour recurs and you have run out of ways to deal with it, your next step should be to get help for your child—be it by consulting with an individual that your child trusts, or seeking advice from your child’s school or a family service centre. In some instances, intervention by the police or the Youth Court may be the only viable options left, and the Ministry of Social and Family Development has a help guide for parents who are at their wits’ end. Fortunately, such drastic measures are not the norm.

Get To Know Your Children

Helping children to deal with anger also requires that you get to know them better, and one way to understand children is to put yourself in their shoes. Richard recounted a year where he was so disappointed by his children’s exam results that he made copies of the result slips and posted them on his children’s bedroom doors, ostensibly to motivate them to improve. Later, on reflection, he asked himself, “What if I performed badly in my yearly appraisal and my boss did the same to me? Would that daily reminder spur me on to do better, or would it demoralise me?” He realised that the latter scenario was the more likely outcome, and decided to find a better approach.

If you have more than one child, make it a point to spend one-on-one time with each of your children. “The rule of thumb is, when you take your children out, treat it like a first date. Do what they like and leave your own agenda aside. The message you want to convey is: ‘I care about you,’” advised Richard. Be it a coffee date at Starbucks or a quick game of basketball, these sessions provide ample opportunity for you to gain your children’s trust, so they can begin to let you know how they feel.