Ever since our family watched the latest instalment of the Transformers movie franchise earlier this year, our DS has been somewhat obsessed with all things Autobots and Decepticons. We even recently bought him a Bumblebee action figurine for his birthday.

Of course, when he got wind that his favourite characters from Cybertron were descending to Earth – at City Square Mall – for the festive season, he started pestering us to bring him there. It was something he did not want to miss this December holiday.

So we decided to fulfil DS’s wish during the weekend. The Transformers aren’t quite up DD’s alley, but she always loves a trip to the mall and thus, happily tagged along. 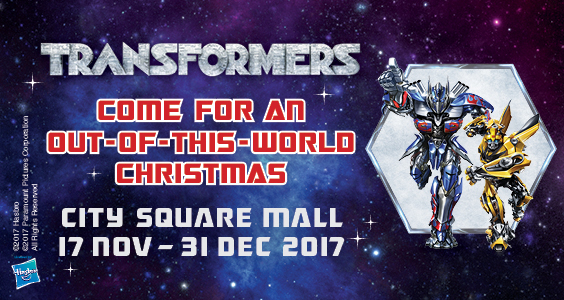 We arrived at City Square Mall and immediately headed for an early lunch. From the many dining options available, we settled on the family-friendly Saizeriya Italian Restaurant (#B2-55/56) for pastas, pizzas and wings, which all kids would like.

Our meal came up to over $50, which entitled us to redeem a Meet the Autobots and Mask Making Workshop pass following the show later. Passes are available only for the first 50 redemptions per show, and fortunately, we managed to secure one.

3-2-1! Countdown! DS had his eyes glued to the stage, eagerly awaiting the moment for Optimus Prime, Bumblebee and some other new characters to appear during the Transformers ‘Live’ on Stage show. And when the music started and the action began, he got on his feet excitedly and interacted responsively with the mascots on stage. Later, I jokingly said to DS that it would be great if he showed the same enthusiasm whenever I asked him to finish his homework!

The performance ended with a bang and it was time for the much-anticipated Meet the Autobots session. With the pass we obtained earlier, our family had the opportunity to pose for a photo with the action heroes.

Afterwards, we went downstairs to Basement 2 where the Mask Making Workshop was taking place for Meet the Autobots pass holders. DS chose to decorate an Optimus Prime mask and then don its costume, saying that he wanted put it on and be strong like the leader of the Autobots. Sigh, boys will be boys…

After making a pit-stop at the food court for some afternoon tea/desserts and to rest our feet, we brought DS and DD to the Level 1 City Green Park where there were more photo opportunities with life-sized Transformers statues, specially brought in from overseas. The kids wandered around doe-eyed, awed by the realistic statues, complete with smoke and laser.

While Hubby watched over the two little ones as they had fun at the Cyber Galaxy Christmas carnival, with bumper cars, inflatable slide and other activities (we redeemed an activity pass with a minimum $40 spend at the mall; shoppers with a minimum of $200 spent will be entitled to receive a travel essential and a Cyber Galaxy activity pass), I sneaked off for some retail therapy at Uniqlo (#02-41/49) and Lalu (#01-36/37) by myself.

By this time, the kids were tired and we were actually contemplating to head home. However, I told Hubby that since we were already at City Square Mall, we might as well hang around till 7pm for the Stellar Light Show, which was supposed to be a first-of-its-kind light and music show in Singapore.

Meanwhile, we had a leisurely dinner of dumplings and noodles at Din Tai Fung (#01-10/11) while poring over the numerous photos we had taken with the Transformers statues this afternoon. I uploaded the best shots to Facebook to take part in the Transformers Photo Station’s photo contest, hoping to win some shopping vouchers. 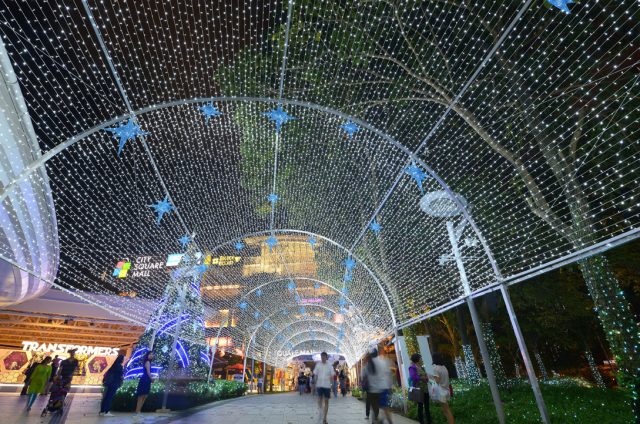 We were transported into a starry universe, through a musical tunnel of stars (spanning over 50 metres) as the night approached and the Level 1 City Green Park was awash with an action-packed light show. The 10-minute show, with over 24,000 LED lights, afforded a sweet ending to our eventful mall outing.

Our family made plans to return to City Square Mall maybe next weekend to catch the Snowy Playtime, which will take place nightly at 8.10pm till 31 December 2017. The kids will surely love experiencing “snow” in the tropics! 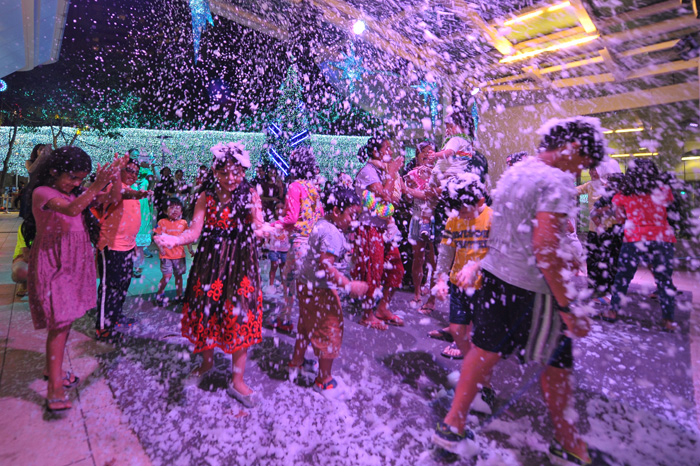 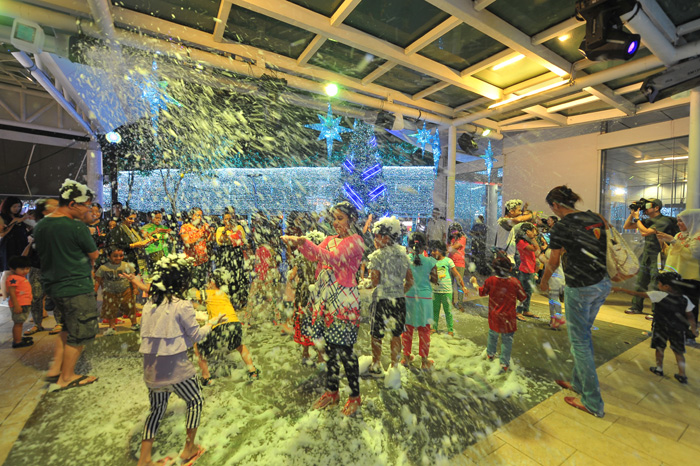 All City Square Mall Christmas activities are available from 17 Nov to 31 Dec 2017, except for Transformers ‘Live’ on Stage show, Meet the Autobots and Mask Making Workshop, which are held from 2 to 17 Dec 2017 (Tue-Sun only).

For more details on the activities and promotions, visit www.citysquaremall.com.sg or check out City Square Mall’s Facebook page www.facebook.com/citysquaremall. Terms and conditions apply.