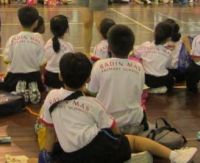 The P1s started their first day in primary schools on Tuesday, 04 January 2011.

Radin Mas Primary School (RMPS) is still on partial single session in 2011.  Hence all P1s and P2s are in the afternoon session from Mondays to Thursday.  As usual, they will join their seniors in the morning session on Friday.

On the first day of school, my husband and I brought our children to school.  We arrived at the school at 12.15 pm.  At 12.30 pm, we proceeded to the school hall on the second storey.  In the hall, we saw signs indicating the various classes (P1A-H, P2A-H).  My children went to their respective classes, and sat on the floor, while my husband and I went to the area that was designated for parents.

At 12.50 pm, one of the teachers from the Pupil Management Department, Ms Emily Tan, came forward, and guided the pupils to saying out our Pledge.  The principal and vice-principal addressed everyone in the hall after the Pledge taking ceremony.  The principal, Mrs Wong, urged all pupils to maintain a healthy lifestyle and adopt a balanced diet so that they could excel in their studies.

After the principal’s speech, the pupils were led to their classrooms by their respective form teachers, while the parents stayed back in the hall to listen to talks organised by the various departments.  Talks from the following departments were shceduled over three days:

(Details of the presentation can be found in school website: http://school.radinmaspri.moe.edu.sg/index.html)

Parents were allowed to stand at the side of the canteen during recess time.  Due to the large number of pupils, recess time for the classes were staggered.  During this first week, all P1s had buddies (their seniors from P2s).  Imagine the P2s having to look after their juniors when they couldn’t even look after themselves!  Ha!  Ha!  Ha!

Throughout the week, pupils learnt about the school, its core values, healthy eating habits, RMPS Cheer, etc.  Everyday at 4 pm, the pupils went for their telematch and parents were invited to watch the children compete in the various activities.

RMPS organises camps for pupils from P1 to P6.  For P1, it’s a half day camp.  The first week of school’s activities culminates on Friday with the "P1 Ready-For-School Camp".  The finale of the camp was the Junior’s Parade at 11 am.  Parents were invited and strongly encouraged to attend the Junior’s Parade.  There was a Cheer Competition (as part of the highlight of the parade) where the children would show the parents the cheers that they were taught by their respective form teachers.  After the Cheer Competition, parents were invited to pin a badge (with their children’s photo on it) for their children.  The pinning signified the child’s readiness for school.

With all these play and bonding activities of the first week brought to an end marked by the end of the Junior’s Parade, all the P1s are now set to start school officially the following week.  Parents are no longer allowed in the school during school hours.  The children are now on their own.

Good Luck to all the P1s!

Great school, I have noticed that education and strong.

Now I know what to expect when DD goes to RMPS next year. Cheers!

Thank you very much for your well wishes, Augmum!  I, too, hope that they will enjoy themselves in the school.

Qms, Wish yr kids have a

Wish yr kids have a happy and enjoyable time in their 6 yrs of education in Radin Mas Primary School. Happy for u as both of them are in the same school and same session.

I thought it wouldn’t interest anybody initially, due to the specific topic touched on.  Are you looking to send your kids to RMPS?

Hi, very detailed 1st week in Radin Mas indeed! I am sure parents with kids in Radin Mas will find your article very useful. Good luck to both your kids! 🙂