Hachiko – A tale about loyalty and unconditional love. 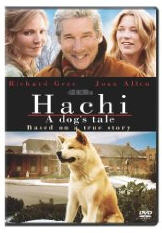 This is a simple but heart warming tale about Love and Loyalty. It is base on a true story behind a bronze statue of an Akita dog just outside of Shibuya Train Station in Tokyo, Japan.

The film starts with a young boy telling the story of a dog which belongs to his grandfather, a professor who commutes to work by train everyday. The dog will walk with him to the train station everyday and return to wait for him to return home everyday.

One day, the professor had a heart attack and never return home. Hachi is given to the professor’s daughter but he escape to return to the train station to wait for his late master to return. His where abouts in the day time is unknown, but everyday at 5:00pm he will wait at the station hoping that his master will appear. This continues for 10 years till he pass away.

The simple act of waiting touches many. In the original version of events, the Professor’s former student returned frequently to visit the dog and over the years published several articles about Hachikō’s remarkable loyalty. In 1932 one of these articles, published in Tokyo’s largest newspaper, threw the dog into the national spotlight. Hachikō’s faithfulness to his master’s memory impressed the people of Japan. Teachers and parents used Hachikō’s vigil as an example for children to follow. A well-known Japanese artist rendered a sculpture of the dog. Eventually, Hachikō’s legendary faithfulness became a national symbol of loyalty.

A moving tale for the whole family. A great starting point to talk to children about pets, death and loyalty.

I watched previously. It was so touching. Definitely a good show for family!

everytime i watch this i will

everytime i watch this i will cry

everytime i watch this i will

everytime i watch this i will cry

The show really make me cry.

it’s really touching. i finish up a box of tissue paper

tks for the recommendation

tks for the recommendation

It is a nice story. a warming one. may be I’ll go for the story book then get the movie to watch….

A Tale Of Mari And Three Puppies

I actually know that this

I actually know that this movie will make me cry, so I didnt watch it.  I recently watch another dog movie (DVD actually with my DD) – 10 Promises to My Dog – it was a good show too – cried alittle.

The movie that made me cried was The passion of the Christ.

I watched with my DS &

I watched with my DS & cried a whole bunch…watched it a second time because he wanted to watch it again. but it is dun find it that depressing lah…its feels more touching than depressing.

Thanks for sharing, chief.

Thanks for sharing, chief. Will catch the Gere version since I don understd a word of Jap.

… found here: (http://www.imdb.com/title/tt0093132/).  I have not watched the new version, because the original was already too depressing for me.

eons ago, an older

eons ago, an older version, isit? I thot it was released only last year? dont worry abt yr macho image, chief. Real men do cry. Since even you cry buckets, I’m glad I didnt watch it alone.

I cried buckets when I saw the movie

I wanted to watch the

I wanted to watch the movie but couldnt find company and din wanna weep alone. Been a long-time fan of Richard Gere since pretty woman. Will find time for it soon. Thanks for sharing.

Parents look back at their most memorable moment in 2016

Learning Skills: Teaching My Daughter To Solve A Puzzle