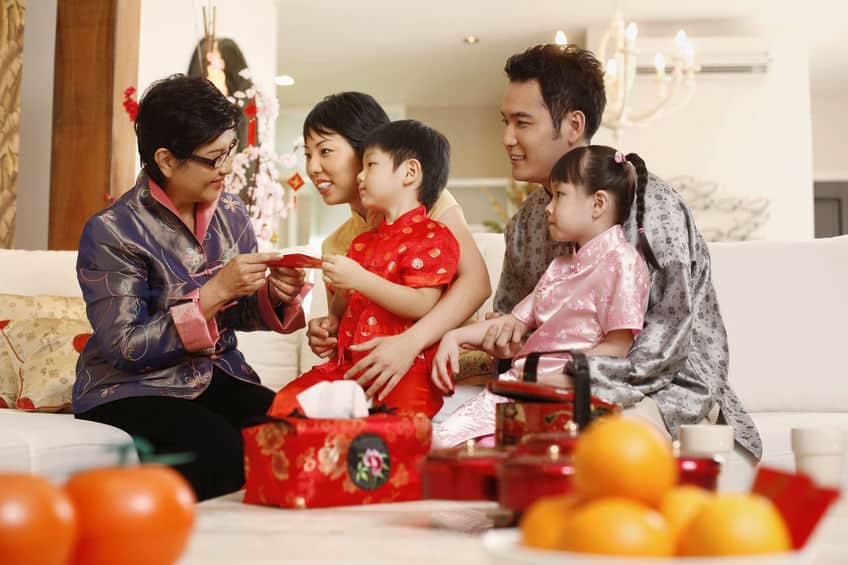 Do you celebrate the Chinese New Year (or CNY), and what traditions do you observe?

You’ve probably heard about Singaporeans skipping out on CNY celebrations altogether, or marking the occasion with a no-frills family gathering, where tradition is limited to the exchange of Mandarin oranges or the handing out of red packets to children and unmarried adults.

In fact, the following scenario may be familiar to a growing number of Singaporean families:

“Every year, in lieu of oranges or red packets, the family would either fly off for an overseas holiday or simply enjoy a quiet dinner at a hotel restaurant. Why hotels? Because very few places were open during CNY. After the dinner, the long holiday just became another regular weekend, devoid of any special importance.”

In families where older generations have dispensed with tradition, it’s left to the younger ones to improvise.

“My husband isn’t Chinese, and my parents haven’t called for a reunion dinner in years,” says a KSP member. “Ironically, my non-Chinese girlfriends have hosted me for several CNYs, and we’ll do the lo hei [prosperity toss] for good luck, so that’s become our CNY tradition!”

“This gradual change of old traditions is something that is happening in all metropolitan cities,” says Helena Gao, a senior lecturer at Nanyang Technological University’s School of Humanities.

There is an upside to this, and it’s that people of different races and religions can come together to honour the occasion. For instance, a local writer’s tradition is to visit the Singapore Buddhist Lodge on the first day of CNY with his parents, and he observes that some of those helping to direct traffic are often volunteers from a mosque. It’s also not unheard of for Indian temples to organise CNY gatherings for those in need. 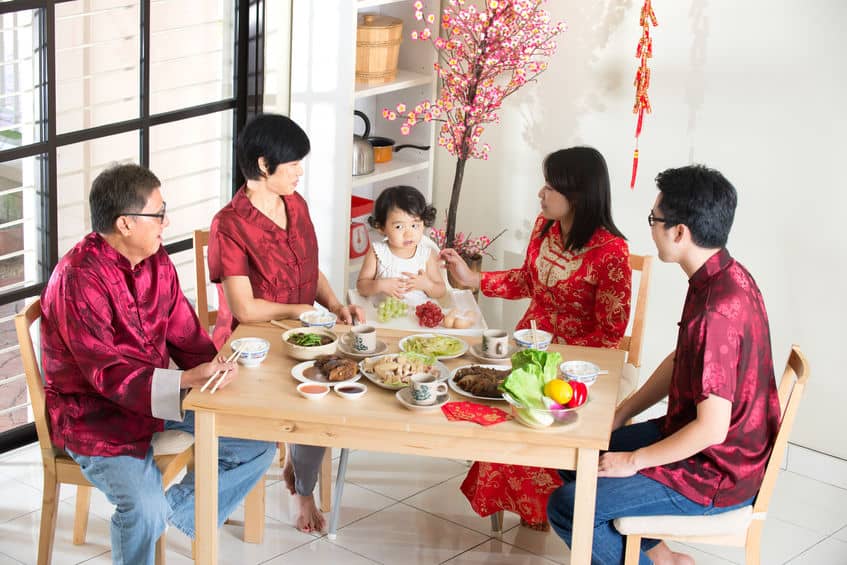 For Singaporean Chinese families who have managed to preserve a semblance of tradition over the years, what do they do?

“My dad’s Hokkien, so I’m Hokkien. I don’t know very much about the traditions of my dialect group because my dad doesn’t quite care about them as long as we have a reunion dinner,” says a local mother. “My mum is Cantonese — she used to grow arrowhead yearly and we would steam and eat them (sliced) during CNY with Chinese sausages and other Cantonese food. But that was only when my maternal grandpa was still around.” (The dish is known as Feng Yi Zu Shi, a Chinese phrase that means “to be comfortably off.” You can find a recipe in Mandarin here.)

A local mum who is Peranakan-Hokkien says that CNY traditions are just a hazy memory. “I remember keeping the lights on in the house till past midnight, to keep the evil spirits away. And on the first day of CNY, we can’t use anything sharp, such as scissors or a knife, but I can’t remember why,” she says. (Sharp objects are thought to symbolise the ending of a relationship. Read about more local CNY taboos here.)

“My origins are Teochew, but my family follows Cantonese and Hakka practices for CNY,” says a KSP member, who makes it a point to celebrate CNY in Malaysia with her extended family. “We will also have a whole chicken on the table for the reunion dinner, as well as on the second day of CNY. The first day of CNY is a pure vegetarian day.” (A whole chicken symbolises prosperity, togetherness of the family, and joy. Going vegetarian on the first day of CNY is believed to enhance longevity, and a popular CNY vegetarian dish is Loh Hon Chai or Buddha’s Delight. Click here for a glossary of CNY foods and what they represent. )

“However, the most important — and simplest — thing that we do is greeting the elderly on the first day of CNY,” she adds. “My husband’s hometown is a rural place, and many things are very basic. CNY is about getting together, eating, and sharing blessings. Being away from our extended families means that being present with them is the tradition we must keep.”

Are you looking to infuse more traditional practices into your family’s CNY celebrations? Or at least, do you hope to be able to tell your kids about some of the unique traditions that are followed by the major dialect groups in Singapore?

Within Singapore, the majority of Chinese are Hokkiens. (For official purposes, the Chinese in Singapore are classified according to one’s father’s dialect group.) Other prominent dialect groups are the Teochews, the Cantonese, the Hakkas, and the Hainanese.

One of the most popular CNY practices observed locally is lo hei, which literally means “tossing up good fortune” in Cantonese. During lo hei, thin slices of raw fish and shredded vegetables, along with a variety of sauces and condiments, are added together and tossed for good luck. This practice is thought to date back over 2,000 years, and it was brought to Singapore by Cantonese and Teochew migrants in the late 1800s. 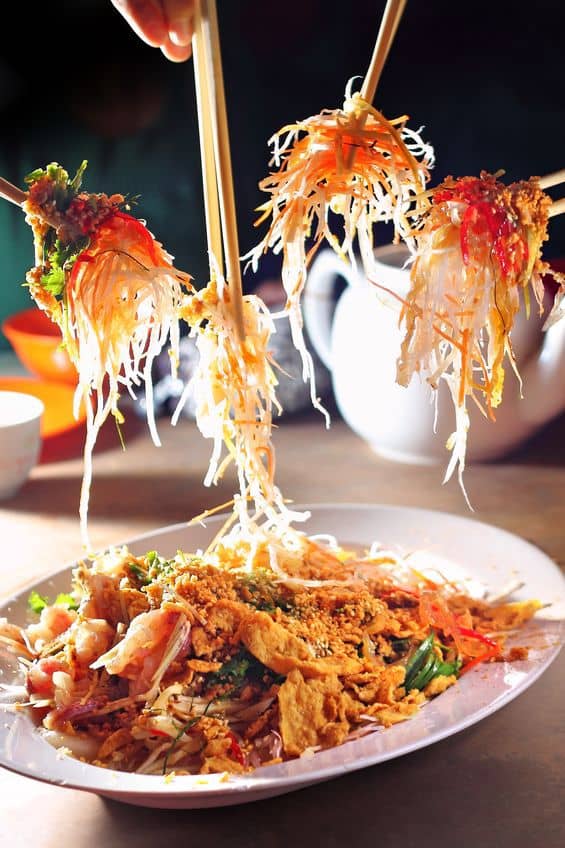 “The Cantonese version, known as Jiangmen Yu Sheng, was eaten on the seventh day of the Lunar New Year and consisted of a simple fish and vegetable salad with salt, sugar, and vinegar. The Teochew version, called Husay, was eaten throughout the New Year period and had fewer ingredients: dried fish wrapped in lettuce that was coated in sesame seeds, and then dipped in sauce.”

Here are some other dialect group traditions that you should know about:

Hokkien: A distinctive Hokkien tradition is the burning of sugarcane — together with paper offerings — on the ninth day of CNY (celebrations technically last for 15 days). This is done in honour of the Jade Emperor’s birthday, and in remembrance of Chinese myths where faithful villagers managed to escape death by hiding in sugarcane stalks.

To find out more about how the Hokkiens celebrate CNY, you can visit Thian Hock Keng, one of the oldest Hokkien temples in Singapore. The temple usually organises a fair on the eve of CNY, and activities include a traditional Hokkien string puppet show, a stilt walking display, and lion and dragon dance performances.

Teochew: A favoured CNY dish for the Teochew community is Qi Yang Cai, a vegetarian dish prepared on the seventh day of the Lunar New Year, featuring seven vegetable types, each conveying an auspicious meaning in Mandarin. The vegetables include spring onions, leeks, and celery.

Cantonese: One must-have ingredient for any Cantonese CNY celebration is cured meats (lap mei in Cantonese or la wei in Mandarin). This tradition originated from the olden-day practice of preserving meats, which would then feature prominently in festive dishes.

Hakka: The early Hakkas in Singapore came from Fengshun in the Guangdong province of China. One traditional dish that they brought along with them was Chun Guan Chang (stuffed intestines with egg). “Egg” in the Hakka dialect sounds like the word “spring,” so this is considered an auspicious dish for CNY. The dish used to be made using chicken intestines, but these days, pig intestines are also used.

Hainanese: Hainanese families celebrate the eve of CNY with chicken (ji) and mutton (yang) soup. They do this because in Mandarin, ji yang sounds like ji xiang, which means fortune. Another popular Hainanese celebration dish is fried glass noodles. The noodles are fried with chives or gao sang, which means “long-lasting prosperity.” The noodles themselves represent longevity.

From all of us at KiasuParents, here’s wishing you and your loved ones a happy and prosperous new year!

Chinese New Year For Kids: Resources For Every Age Group