Just as many roads lead to Rome, many routes lead to realizing the Singapore Dream too. In the past, the PSLE-GCE ‘O’ & ‘A’ LEVEL route was often considered the most legit path to university for local school children.

But these days, we see more students daring to chart a different education course. And we bet more will contemplate doing so after what Prime Ministry Lee Hsien Loong said about a degree not being the only key to a bright future during the 2014 National Day Rally.

In this first installment of KiasuParents’ special feature, we introduce the International Baccalaureate (IB) Diploma programme as an alternative to the mainstream pre-university education. Still regarded as a road less travelled, it is nonetheless gaining the attention of parents and students alike.

What is the IB?

Started by an organization of the same name in Switzerland since 1968, four IB programmes are offered to students, namely the Diploma Programme, Middle Years Programme, Primary Years Programme and IB Career-related Certificate.

In a nutshell, the IB Diploma can be considered as an option to the tried-and-tested Singapore-Cambridge framework. Normally, a student pursuing four years of secondary school, followed by two years of junior college will graduate with both ‘O’ and ‘A’ Level certificates under the GCE standard curriculum. But with the IB, the student will study six years in an IB school, skip the ‘O’ Levels and proceed to take a final exam that is different from the ‘A’ Level or may take up the IB programme, sometimes transferring from a non-IB school after Secondary 4.

In Singapore, the IB programmes gained traction only in the early noughties. During his 2007 speech addressed to the IB community in Singapore, Mr Tharman Shanmugaratnam, then Minister of Education, noted the growing interest in the IB. He said that although “the Singapore-Cambridge GCE “O” and “A” level exams and curricula will remain the mainstay of the school system… we are also encouraging the emergence of alternative curricula in Singapore education, both amongst our state-funded schools and in the private field.”

What is the IB Diploma curriculum? 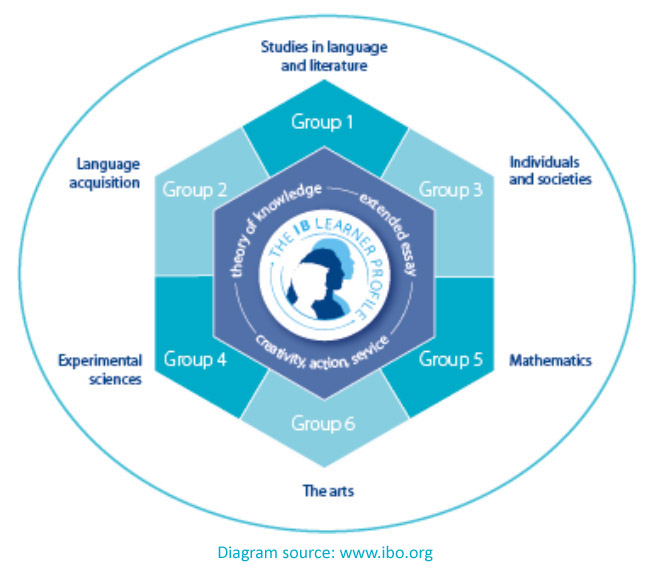 To graduate with an IB Diploma, students need to study six subjects (three each at standard and higher level), which include two languages and subject areas such as Sciences, Mathematics and the Arts. In addition, they must meet requirements in three key components – Theory of Knowledge (aimed to let students express their view of knowledge issues), Extended Essay (write a 4,000 word essay on a topic of special interest), as well as Creativity, Action and Service (activities alongside their academic studies). See full subject list here and learn more about the three main core components here.

However, unlike the Cambridge system where final results are based on the total points scored for a required number of subjects, a student must pass every IB subject and component in order to pass the entire examination to earn an IB Diploma. In a sense, how well one does for the IB depends on consistent work put in throughout the year.

During the course of study, IB students also get to learn how to be responsible global citizens through the Creativity, Action and Service (CAS) component. For example, activities IB students at ACS (Independent) engaged in include regional trips such as to villages in Thailand to improve their water source or work with the children there. At St Joseph’s Institution, one of the service activities their IB students could take up as part of the 2013 curriculum was working with the Humanitarian Organization for Migration Economics (HOME) to teach English and ICT skills to migrant workers.

Who offers the IB?

In 2007, there were eleven schools offering IB programmes. Today, the number has increased to 29, according to the International Baccalaureate Organisation’s (IBO) website. Although mostly consisting of international and private schools, such as Australian International School and German International School, several public-funded schools such as ACS (Independent), St. Joseph’s Institution and School of the Arts are also on board.

The criteria for admission to an IB programme may differ from school to school. Follow these links to find out more about the IB programmes at these selected schools:

The IB: Is its curriculum for you?

What Parents Should Tell Teachers