When most people talk about martial arts, names like Karate, Judo, Jujitsu, Tae Kwon Do, BJJ, Muay Thai, Kali, (Eskrima), Systema, Wing Chun and other Chinese Kungfu are the common ones that pop out. Aikido (合气道) is the only “martial art” that still confounds and confuses people till these days.

Aikido is commonly known as a “modern” martial art founded in the early 20th century by Morihei Ueshiba from Japan, affectionately addressed as “O’ Sensei”, the Great Teacher (大先生) or Kaiso (开祖) within the Aikido fraternity and even in the martial art world. O’ Sensei himself is a renowned martial artist in his times in Japan and many compatriots in that era flocked towards him to practice and learn from him as disciples. O’ Sensei’s own life experiences pre- and post-world wars formed his personal philosophy greatly and Aikido – or the Way of Harmonious Spirits, the Way of Unifying Life Energy or the Art of Peace – was born during that time.

Aikido is in fact neither simply martial (to fight or go to war) nor just an art (like modern art and dancing). There are no attacking moves, no aggression, no fighting and no competitions in Aikido. It is both martial and art, and yet it encompasses more than just self-defence techniques.

Although it stems from ancient Japanese Budo (Warrior’s Way), including arts like Jujitsu, Judo, Kenjitsu, Aikido has, over the decades, evolved into a complete art which can be martial and yet can be spiritual in the way it builds and strengthens the character of a practitioner. An Aikido practitioner or an Aikido-ka follows closely the 5 spirits of Budo (武道), namely, Shoshin 初心 (beginner’s mind), Zanshin 残心 (lingering mind), Mushin 無心 (no mind), Fudoshin 不動心 (immovable mind) and Senshin 先心 (purified and enlightened mind). It is a total system that unites one’s mind, body and soul, paying full respect to nature and fellow human beings (friends and enemies).

It is in this light that my daughters and I started our Aikido journey more than 5 years ago back in 2012. With the objective of doing something together as father and daughters, my eldest child Sze Ern (currently 14yo) and I enrolled in a local Aikido group founded by Shihan (師範) Philip Lee (currently 7th Dan Aikikai) and started learning the art with hope of picking up some “gentle” self defence suitable for girls and middle age men past 40, and keeping fit – common (mis)perceptions of Aikido. Later in 2015, my youngest daughter Sze Zin (currently 9yo) also jumped onboard the aiki-wagon with great enthusiasm together with few of her good friends about the same age. They are bonding quite a lot during this experience. 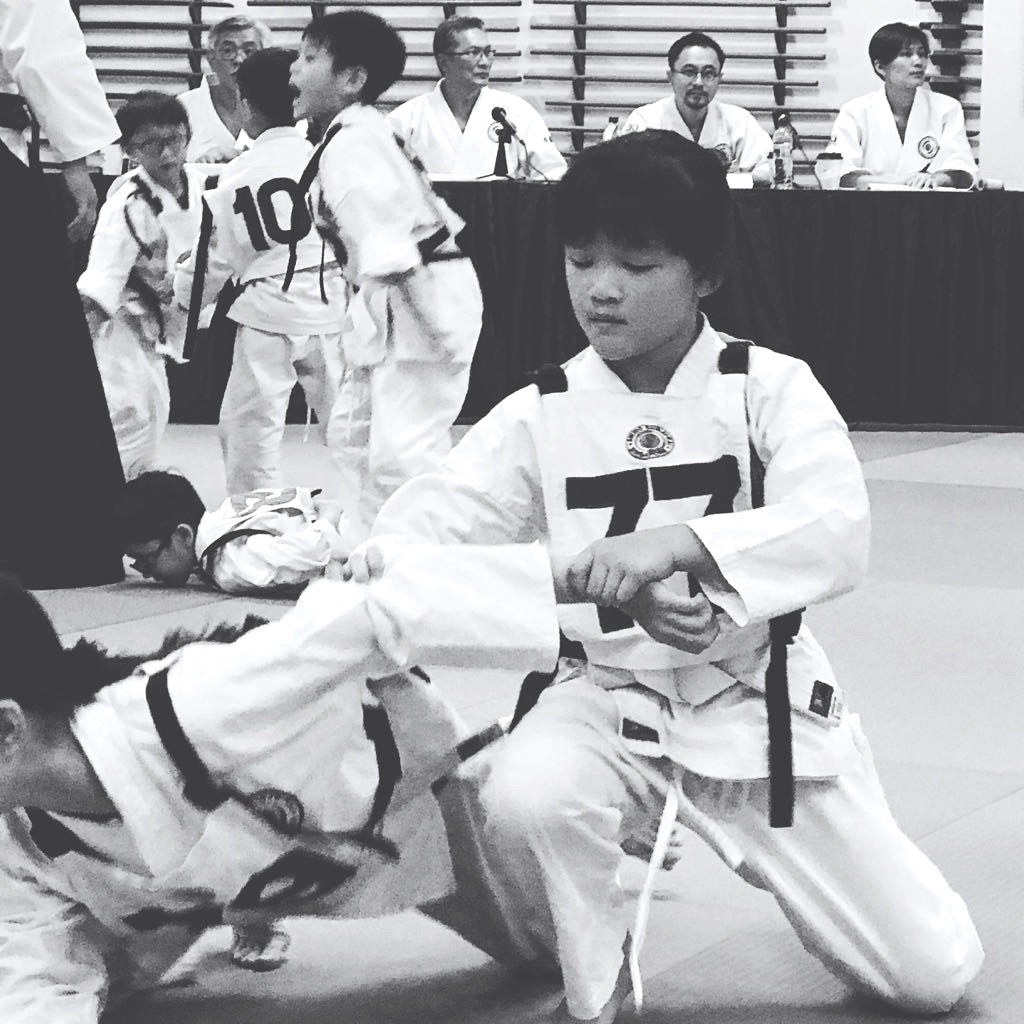 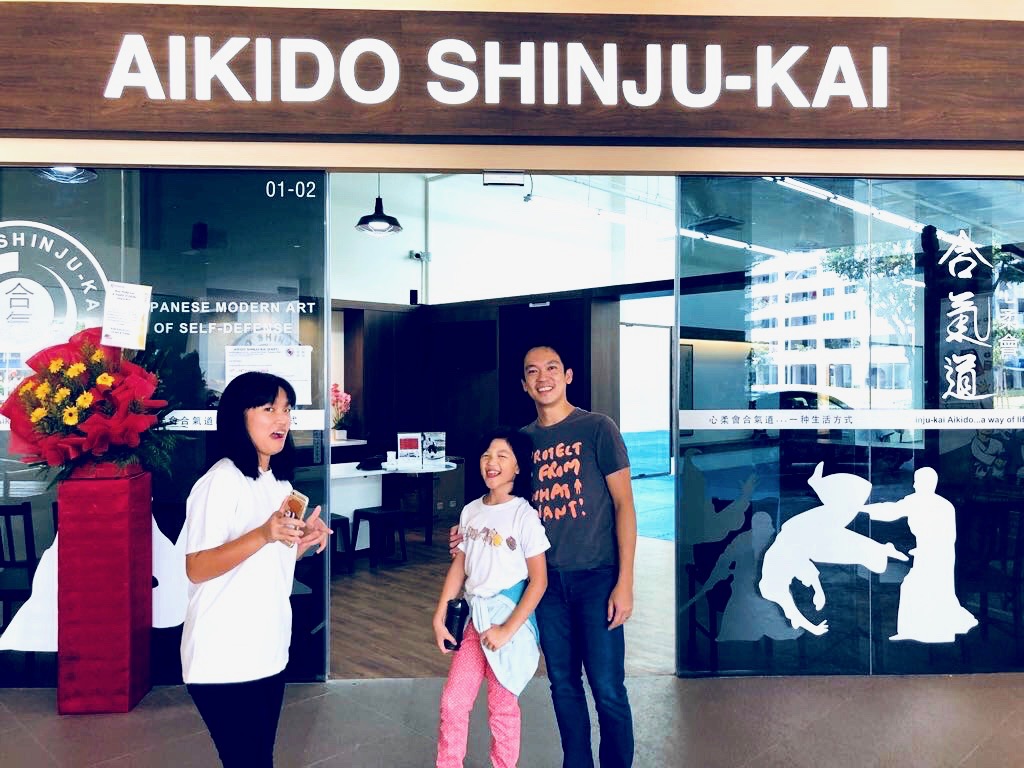 My wife saw positiveness in this effort and is fully supportive of the girls. In fact, she also plays her part in recommending Aikido to several friends along the way.

For the children, it is a great martial art as it prepares them with confidence, self defence skills, alertness, agility as well as a good degree of interaction on the mats with other kids as we are encouraged to have different training partners within every sessions to cultivate a strong adaptability to different builds and styles of each individual. There is a fair mix of training and play in each session for them.

The kids also have the chance to practice with the adults at times to let them have a feel of handling the “giant” attackers. Adults learn by humbling themselves to feel the strength of the kids or teens and adapt accordingly. This hones our flexibility and builds our character in accepting and respecting each and every individuals.

In fact, O’ Sensei had always wanted the art to be available to people of all races, beliefs and age groups. Be it young or old, men or women, tall or short, fat or thin, Aikido is universally similar and yet different for individuals. Aikido can be an effective self defence for a lady, a good flexibility and agility workout for an elderly, an active and fun practice for a child, and a very intensive and tough training for a young adult. A typical training for an adult can involve 100-200 falling and getting up as we switch roles between executing a technique and being an attacker. This really builds up our core muscles and flexibility.

Apart from its physical prowess, Aikido builds resilience and humility in a person as the philosophical aspect of Aikido advocates mutual respect and love for the Creator, our Mother Nature and humanity as a whole. Aikidokas are constantly asked not to fight, if possible at all, not to show off, not to compete or compare against other martial arts and to advocate peace. One just has to search on the internet to easily find numerous words of wisdom from O’ Sensei reflecting all these values and his world view.

“There are no contests in the Art of Peace. A true warrior is invincible because he or she contests with nothing. Defeat means to defeat the mind of contention that we harbor within.”
Morihei Ueshiba (1883-1969)

During training, there is always full respect and adherence to dojo etiquettes such as bowing, respecting each other, thanking and appreciating each other and keeping the dojo neat and clean. A very good discipline training for active kids! And for every student, they are also asked to be mindful of each other around on the mats, taking care of safety and yet adapt to practicing within tight spaces when there are more people attending training during certain days. It is a complete package.

It is my hope to share this amazing art with as many people as possible in my lifetime, not just for my family, my children and my friends, but to whoever is seeking something exciting beyond just the daily routines of life, make more friends, get physically fit, resolve conflicts peacefully, build inner confidence and develop a solid character of great virtues.