When family and friends first heard that Chester is practicing Brazilian Jiu-Jitsu (BJJ), most of their immediate reactions were; “Woah! So cool!”; “That’s good! Sounds fun!”; “Why BJJ? Why not Taekwondo or Karate?” so on and so forth.

But it was definitely not because of the cool factor that I decided to encourage Chester to practice the BJJ art. So, why BJJ, you may ask?

My initial intention of exposing Chester to martial arts was to toughen him up as a boy. It was definitely not to enable him to pick a fight in school or at the playground but, it is a skill which I hope would instill in him, discipline and focus as well as enable him to protect and defend himself and others. It was also made very clear to Chester that for any martial art that he learns, it would always be only for defense and not for striking an attack.

I only had a brief knowledge about BJJ through friends and perhaps, the media when I decided to let Chester have a go at it. It seemed like a good skill to pick up because unlike Taekwondo and Karate which most kids are learning, BJJ is much more than just kicks and punches. After some research online, I signed him up at The Gentle Art Academy (TGA).

Before we started the class, Coach Brendan sat us down to give us an overview of the history of BJJ. He did not want us to enroll Chester for the sake of, but would like us to first understand what the BJJ art is and its effectiveness. I really appreciated Coach Brendan’s patience in helping us understand the BJJ art.

BJJ has given hope to many that you can be effective against a larger opponent and you do not need to be stronger or bigger than your opponent to win. You may read more about the history of Brazilian Jiu-Jitsu at the end of this post.

So much to my surprise and delight (after a bad experience during a Taekwondo trial class), Chester told me right that he enjoyed himself and his exact words were ‘Mum, this is so fun!’ and I exclaimed in heart “Thank goodness! Finally!”

TGA has a clean and big space and I love how parents could just sit by the side to watch the class. Coach Brendan and his team of capable coaches are passionate, patient and caring when instructing the kids. I am excited and look forward to accompanying Chester to lesson every Sunday because it is not just a learning experience for Chester but also for me, as I get to learn more about BJJ through keen observation of the coaches teaching the kids new techniques (so I can practice at home with Chester!) and watching Chester and his friends spar with one another on the mat.

Each lesson is an hour and it is well structured. The coaches place great emphasis on learning the techniques properly, with clear explanation on the scoring of each technique and the kids go on to practice the new technique learnt as well as spar with one another. If you think that the lesson is just all sweat and serious with no fun at all, then you’re wrong. The kids also get to learn in a fun and engaging way through games played during training which incorporates some of the BJJ techniques. 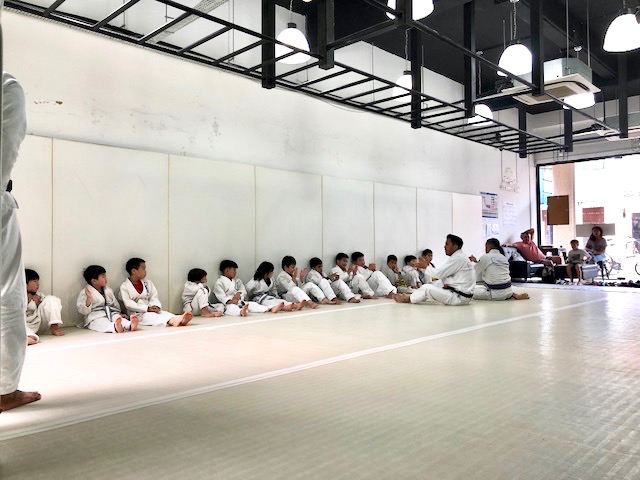 Watching the kids at class by the side, I have seen great camaraderie and sportsmanship being displayed by them, especially when sparring. They have fun grappling with one another on the mat and boy, they can be very competitive when going for takedowns and submissions, including us parents who are watching and giving pointers by the side! But, we never let the competitiveness get the better of us. We encourage the kids after each fight with a “Good job!” and “Good try!” and the coaches never fail to ask the students to thank their friend for a good fight.

It has been 2 months since Chester started practicing BJJ at The Gentle Art Academy and the greatest accomplishment for me as a parent thus far, is seeing how practicing BJJ has really toughened Chester up and helped him gain confidence and discipline, both on and off the mat. I am very glad to see how focused and committed Chester is and giving his best at every lesson. BJJ has also helped to tighten the bond between Chester and I; it is a sport that we both enjoy and we discussed regularly about what was learnt at class, what could have been done better and we even try to practice some moves at home, with care of course!

The Rise and Expansion of BJJ
Helio Gracie was a very frail young boy who was learning Japanese Jiu-jitsu from his older brother, Carlos Gracie who learnt the art from a Japanese master Mitsuyo Maeda in the early 1900s. However, he wasn’t as effective as his older brothers because he didn’t have the physical attributes that were required to make the techniques effective.

Out of necessity, Helio Gracie began modifying the techniques by incorporating more leverage, timing, energy efficiency and technique, ultimately giving birth to what is now known as Gracie Jiu-Jitsu or Brazilian Jiu-Jitsu.

Helio Gracie then began engaging in challenging fights to prove the effectiveness of his style of how you can defend yourself and defeat your opponents no matter the built.

Helio’s son, Rorion Gracie started training BJJ since the first days he could walk and eventually got his black belt. He decided to go to USA to establish Gracie Jiu-Jitsu so that the rest of the world can catch on his family’s techniques. He opened up an invitation to anyone who believes in their punching and kicking, to go to his garage to try it out against Jiu-Jitsu practitioners to see what happens. Martial arts masters whom have been practicing for many years saw for the first time that they were not able to do anything, against someone who’s smaller, weaker and less athletic.

Rorion Grace soon realized that in order for the rest of the world to find out about BJJ, it would have to go on television and that sparked the creation of The Ultimate Fighting Championship (UFC), with the first being held on November 1993. Rorion sought out the toughest and most reputable martial artists from various disciplines and set his brother,

Royce Gracie who would be the smallest representative, up for those fights. Royce Gracie went on to be the greatest testament to the BJJ art where people saw him defeating larger opponents with nothing but skill, timing, patients, energy efficiency, distance management and BJJ techniques.

Contributed by: Chester, my first-born, is 8 years old and has been practicing BJJ for 2 months.