Martial arts classes make children violent. I have never been a big fan of any type of martial arts, let alone sign my child up for any classes in his growing years. This is partly due to the fact that I was brought up in the generation of our parents reminding us not to 动手动脚. The only reason I encouraged Cayden to consider Wushu offered as CCA in his school, was because of DSA – in case he can’t get into one of those schools with impossibly high cut-off points. To me, it was important to work towards a good t-score to go to a good school, but in case he did badly, I have other contingency plans. I confess I belonged to a nation of academic zombies!

His school is pretty strong in Wushu, where they won several National Championships, amongst other popular CCAs like chinese dance and table tennis. I picked Wushu because it promotes moral values centred on honour, discipline, respect and loyalty where my young man can perfect his own character. However, my dreams were short-lived. Cayden disliked every training session and criticized the overly ritualized movements in the traditional martial art. He will be asking me after every training, “When can I stop?” I knew he would never grow his passion in Wushu, hence we withdrew after one term of torturous training (to him).

I was often being accused by the husband for over-protecting this kid. “He is a boy! He should learn to take a few bumps, deal with adversity and learn perseverance!” I rejected the proposals of signing him up for Taekwondo because I dislike the idea of chopping blocks of wood and swinging fists (lest practising it on his classmates). Then again, Cayden had never been an assertive or rough kid, even if he picks up a martial art, it is to burn off energy. I told myself, it may not be a bad idea for him to pick up some self defense techniques to protect himself from a physical attack. After months of nagging from the old man, I finally gave in to a trial class at Evolve MMA – on conditions that there are no punching, kicking and breaking legs. (At times, I really think it was the dad who is trying to live his dreams through the kid.)

Specialising in Muay Thai and Brazilian Jiu-Jitsu, the former focuses on developing quick reflexes and the latter focuses on grappling and ground fighting. By the end of trial class, he LOVED it. You know what comes after. 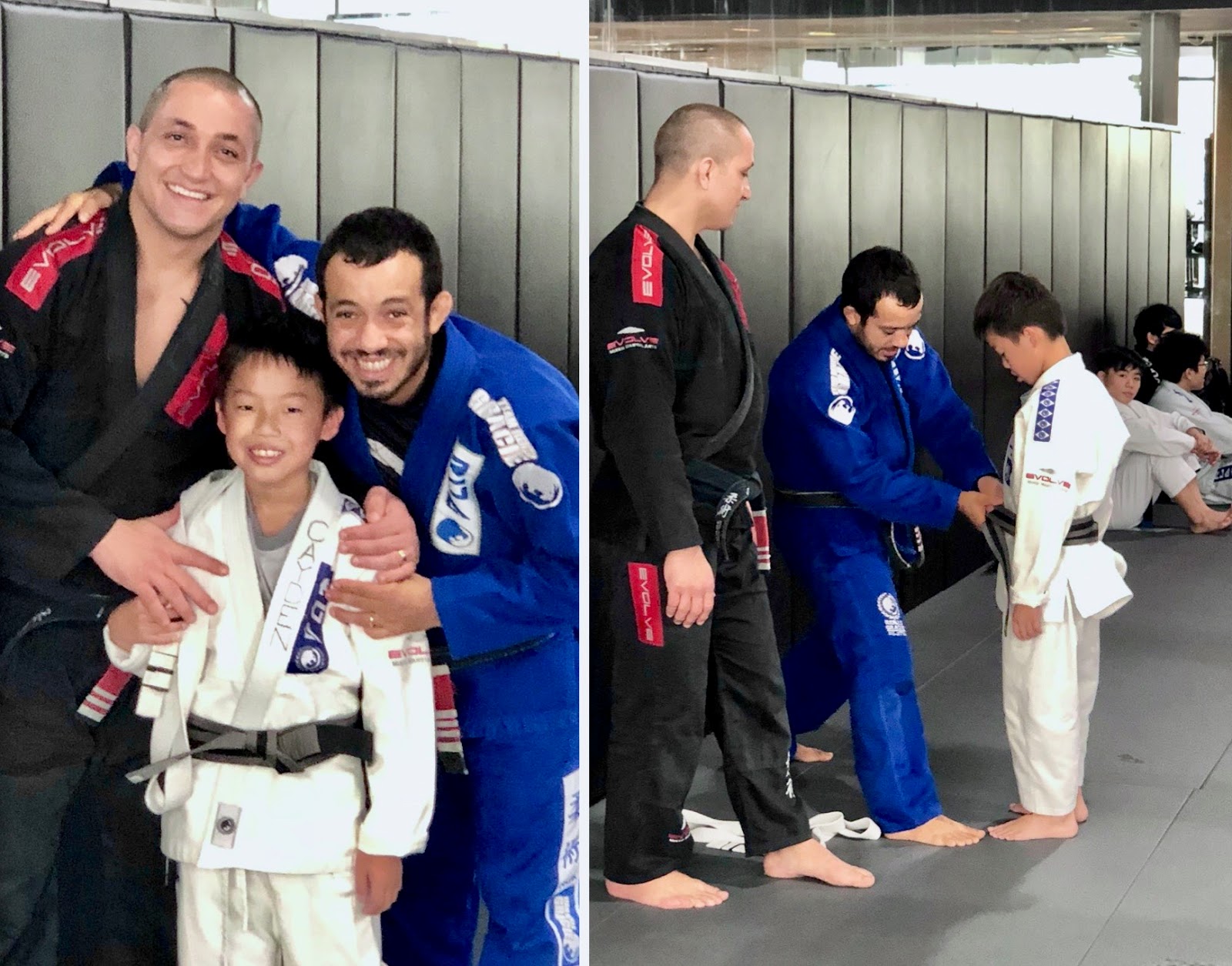 What kept Cayden interest going was the different learning each class brings – forward rolls, spars, and complex combination. Of course, classes, no matter whether it is Brazilian Jiu-Jitsu or Muay Thai, follow an overall structure such as warm ups/stretching, technique drills, free drills, and a warm down, for example. These drills remained consistent.

Moreover, there is a belt and often ‘leveling’ ranking system that allows recognition for the student’s effort and progress. The martial arts ranking systems help to teach children structural hierarchy and that in persevering, they will reach their goals. Bowing may seem endless, but it is there to remind children about respect and gratitude in martial arts, they are big on sportsmanship and respect.

So far, the experience had been positive. I am convinced that Mixed Martial Arts [MMA] does maximize the potential benefits to a child’s physical conditioning, motor skills, and agility (until I see bloodied nose). At least, I think my boy will be able to control and restrain a bully while waiting for teachers or an adult to step in.

Cayden started from the Kids program, learning BJJ and Muay Thai at Evolve MMA since July 2017 and has now progressed to the Pre-teen program.

Which martial art is best for your child? Until they start, you won’t know which one best suits them.