Here is a list of neighbourhood schools with prominent leaders, but do note that some of these schools may now be considered popular options due to the individuals at the helm. 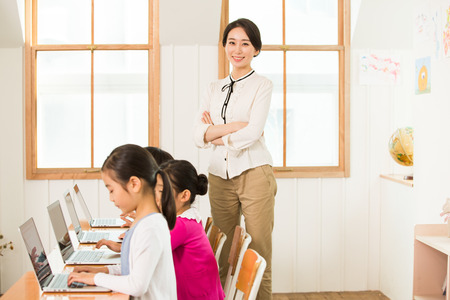 Previous Designation: Principal of Maha Bodhi School from 2005–2013, and vice principal at MBS for five years before that

Quote: Mrs Lim has said of her priorities as an educator: “Students don’t have to grow up to be prime minister or anything like that, as long as the fundamental good behaviour is there.”

Fact: A parent interacted with Ms Chan for a year over e-mail prior to placing her son in Alexandra Primary; Ms Chan’s patience and willingness to answer her questions left a favourable impression.

Quote: Commenting on her transition to Bedok Green, Mrs Ng said, “It’s not about bringing everything over wholesale but analysing the school’s current practices and identifying opportunities to strengthen them.”

Fact: Back in 2007, 165 parents from TKPS signed a petition to retain Mr Seelan as their principal when news of his transfer broke.

Quote: Mrs Liang began her teaching career with a relief stint at Dazhong Primary, and she said she was “delighted to be posted back to Dazhong after… almost 25 years in the education service.”

Quote: Upon word of his new posting in 2013, Mr Ong said, “I’ll need to look at what the school has been doing to address [the students’ learning needs], and from there, I will see how to add value.”

Fact: Mdm Goh said her focus for Jing Shan in 2017 was to scale up some of the school’s “good practices,” including implementing the school’s “Seamless Science” programme for the entire Primary 3 level, where thinking routines and the use of tablets are incorporated into learning.

Fact: Of the first-time principals announced by the MOE in 2015, Mrs Kum was the youngest, at 35.

Fact: Miss Chee’s strategy for thriving in school is the 3Ps—Pay attention, Participate actively, and Persevere. She also advocates practising the 3Rs (Read, Revise, and Relax) every day, and “turning these practices into habits and a way of life.”

Fact: Her memories of loving teachers who made every class fun spurred her on to become an educator, and as principal, she always has the students’ best interests at heart, she said in a BERITAMediacorp interview.

Quote: “My personal belief in education should never change regardless of the school that I serve… Education is not a competition. Every individual has a chance to go through the education system and then make this world a better place,” said Mrs Lee in an interview for the Qihua newsletter.

Quote: Mr Lim believes in character education through programmes such as storytelling. “When [pupils] see that it is not something abstract… I think they’ll take it much better than if we just told them that this is an important value and they need to learn it,” he said in a Channel News Asia interview. “They will always ask why and how are they going to learn it. But through stories, through real-life experiences, they can see that it is real and it is beneficial for them.”

8 Crossover Principals From The MOE HQ

Quote: Northland would focus on communication skills and initiative in 2017, said Mr Tan in his principal’s message. “What better way is there than to encourage [pupils] to speak up for themselves to the teacher-in-charge to address their own concerns? As parents, by consciously taking a step back, we can give children the much-needed room to learn how to express themselves intelligibly,” he advised. “After all, it is only with constant practice that they can learn to acquire the art of communication.”

Fact: Ms Oh began her career as a physical education and math educator, and she has experience teaching in government, autonomous, and independent schools.

Fact: Mr Govindan highlighted Peiying’s efforts to emphasise holistic development in his principal’s message, and this included reviewing its recognition platforms; for instance, in 2016, top performers were honoured with a prize presentation, but no order of merit was mentioned.

Quote: “The student-teacher bond can last a lifetime,” said Mdm Moliah in a video feature for Schoolbag.sg. “I still have former students sending Teachers’ Day messages every year without fail… This is one of the reasons many of us become teachers in the first place. This nurturing of human relationships binds us together to uplift the human spirit, to make this world a better place.”

Quote: “Vibrancy” and “variety” are SVPS watchwords, said Mdm Sharida in her principal’s message. “The vibrancy and variety we offer [reflects] how mindful we are of the different needs of our children and how we need to make learning meaningful and exciting to engage them,” she said. “Lessons vary from traditional chalk and talk to enthusing children through outdoor and inquiry-based learning. Our teachers tap on a myriad of strategies so that lessons are both vibrant and engaging.”

Quote: “We have forgotten what it means to focus,” said Mr Tan in his principal’s message. “There is compelling evidence… which suggests that when students and adults multi-task, especially when we are doing our work, our learning is compromised. Meaning, we understand and remember less and this affects the way we can transfer our learning to new situations.” Learning to pay attention again is a key concern of the school, he added.

Quote: Speaking about his responsibilities as an educator, Mr Chan said: “Children are curious, active and competent learners. They can learn almost anything with the right support and environment. Our focus as educators is to facilitate authentic learning experiences through quality interactions. We want to provide opportunities to nurture their holistic development for lifelong learning.”

Quote: A growth mindset is crucial in these volatile times, said Ms Ang in her principal’s message. “Having a growth mindset will enable us to be bold to broaden our horizons, and to connect and interact with people of various cultures and from different places… We need to manage a world where there is no one right answer, and… to understand issues from multiple perspectives.”

To view details about each school, visit the KiasuParents primary school database.