Will your child be affected by the Primary School Leaving Examination (PSLE) scoring changes that will take effect in 2021?

With a fresh round of updates delivered by the Ministry of Education (MOE) last week, our KSP community is once again buzzing with questions and concerns. 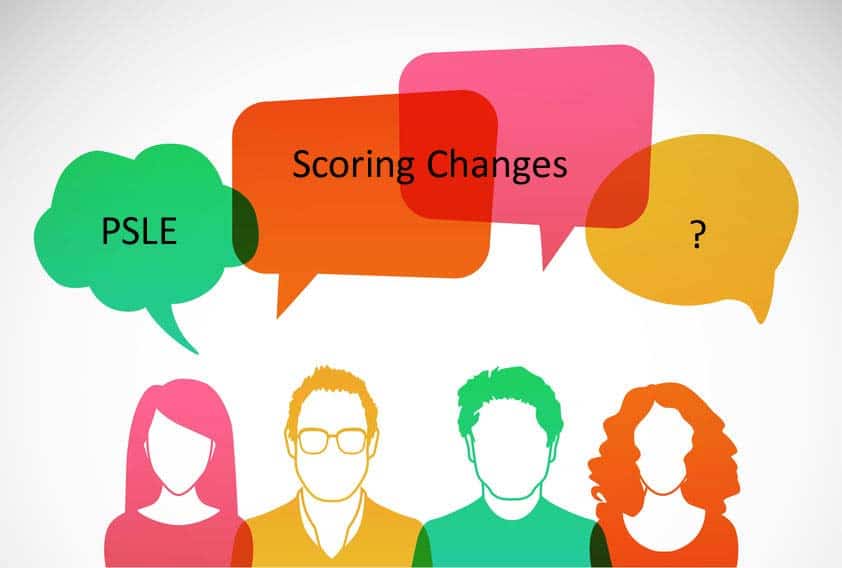 But first, a recap of the latest news that parents should know about:

What does our community have to say about all of this? Read on to find out!

Will More Students Need To Ballot?

“Let’s say a school’s cut-off-point is AL5, and suppose there are 60 students with AL5 who chose this school. Does this mean all 60 students will enter computerised balloting?” asked one parent.

Hypothetically, if there are fewer than 60 places left in the school, and all 60 students in this tie-breaker scenario are Singapore citizens and their choice order is the same, then they would indeed enter the computerised balloting phase.

That said, the eventual balloting figure will still depend largely on the choice patterns of students, so it remains to be seen how this will play out in 2021.

Tougher To Get A “Top” Score?

More than one parent has lamented that under the existing T-score system, a student can be “weak” in one or more subjects, but if he or she is strong in the remaining subjects, a score of 250 and above is still possible.

“With the new scoring system, a child will need to be strong in all four subjects to score a 4. In the current system, if a child scores 90+ for Maths, 90+ for Science, 90+ for English, and 85 for Chinese, he will probably qualify for a top-tier Integrated Programme (IP) school. But under the new system, this student will get AL5. Can he still get into the top IP schools?” asked one parent.

“[One] extra mark in a subject might help you jump to the next level, which might give you access to a different calibre of schools,” said another parent. “So it’s important to buck up for the weakest subject, which incidentally for most children is their mother tongue.”

If many parents are thinking along these lines, it’s understandable that the new system could create more PSLE stress for families. However, it’s good to bear in mind the MOE’s intent for introducing these changes — to help our children make learning, and not marks, their key focus. To encourage students to focus on their own learning, the new scoring system will show students how well they have learnt, and not how they have done in comparison to their peers. Also, with our increasingly diverse secondary school landscape, there will be a variety of quality schools for every student to choose from.

Despite the scoring changes, the school syllabus will remain the same. As such, some parents have been wondering if the current PSLE T-score system can provide some reference points for the future AL scores.

“Under the current T-score system, those who are eligible to take HMTL in secondary schools are either in the top 10% of the PSLE, or ranked top 11–30% with an A* grade in MTL, or at least a Merit in HMTL, in the PSLE.”

Other parents have made attempts to peg the new AL scores to the existing T-scores — interested parents can view the discussion, but do note that these score calculations are merely speculative. All enquiries about scoring should be directed to the MOE.

How To Choose A Secondary School Based On ALs?

With choice order playing a bigger role in school allocations from 2021, how will the decision-making process change?

“With balloting and other unknown factors about the ALs and which schools to apply to, I think there may be more appeals after the posting results,” said one parent. “I shudder to think about how schools will manage the overwhelming number of appeals.”

“If you are concerned about freak results, the best solution would be to put more care and thought into the school selection process,” said another parent.

A possible strategy for selecting schools was outlined by a parent, as follows:

“If you have a score of AL10, you will probably have a target list of 10+ AL10 schools. You will pick two of them.

You will probably have a list of schools that you are also keen on from the AL8 or AL9 group. Pick one of them.

For the rest of your choices, fill it up with AL11 and AL12 schools.

On the other hand, if your score is AL10, and you choose to put AL10 schools as your third, fourth, and fifth choices, good luck, because the chance of you ending up with none of them is very high. You will also have to hope that your sixth choice school is available to you, otherwise, you will be subjected to an MOE posting. In my opinion, this is no different from the current T-score posting exercise.”

Feeling anxious already? Don’t worry, you are not alone. “Your kid is only one out of close to 40,000 students in the cohort,” said one parent. “It affects everyone, and not just you. If everyone chooses sensibly, things will fall into place.”

Let us know what you think about the new PSLE scoring system! Join the conversation here.