With the year-end exams approaching, will you be setting new screen time rules for your child? Here’s how one family does it—no TV set at home, and with daily limits on phone and computer use. 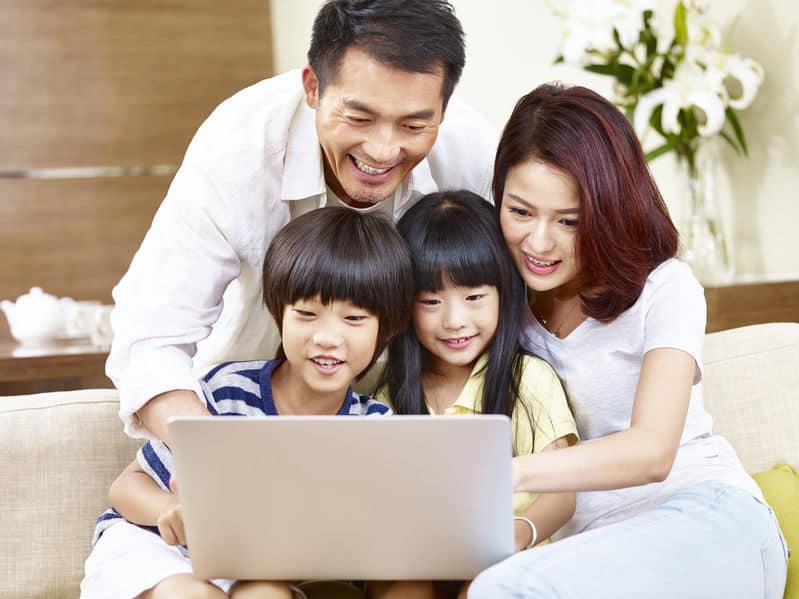 I have two kids, aged 7 and 12. We haven’t had a TV set since my 7 year old was born. We made that decision when we moved into our present home—at the time, we wanted a spacious living area that was conducive for conversation, rather than having the TV take centrestage.

After seven years, I can safely say that we don’t miss the TV at all! It doesn’t mean that we’ve given up on movies and video entertainment. We’ve simply switched over to using our laptops for viewing. Our kids get to pick a movie or cartoon series to watch on Friday and Saturday nights, and sometimes Sunday nights too. They really look forward to this, and they’ve caught animated classics such as My Neighbour Totoro, as well as the entire Harry Potter series and Star Wars. I subscribe to Netflix, which gives us many child-friendly viewing options.

The gadgets that we have at home are an iPad and a Kindle, which I share with my 12 year old. They both have iPhones; my 7 year old uses one of our old phones. We have a handful of downloaded game apps on the iPad, and both kids are quite tickled by SnapChat; they don’t add friends and I’ve disabled location tracking. My son also uses the iPhone to take pictures around the home or “talk” to Siri, so it’s all quite innocent for now.

My daughter uses WhatsApp as most of her classmates are on it, and they have a class chat group. She’s also been tuning in to a kid-friendly channel on YouTube called EvanTube, and she has Spotify installed as well. Both the kids have alerted me to inappropriate content that they’ve spotted on ads, and I know my daughter avoids songs labelled “Explicit” on Spotify even though I didn’t set any rules for music. I’m glad to see them policing themselves for now.

Generally, the rule for my son is that he can use the iPad for 10 minutes a day. He does try to bend the rules or negotiate for more time. Occasionally, he does end up using the iPad for an hour or more if we’re distracted, such as when working or hosting friends. He also gets more screen time on sick days. But on most days, he sets the timer and returns the iPad to my drawer when he’s done. It’s more of an honour system, but I prefer it this way.

For my daughter, because she’s preparing for the PSLE, I’ve recently laid down a new rule: she is to leave her phone in my bedroom until she’s done with her work for the day. I haven’t imposed a phone use limit on her, but I’ve talked to her about phone distractions, and how the messages that come in are seldom urgent—if it were an emergency, her friends would call instead.

I observe my kids when they are asked to hand over their devices to me; if they are displaying obvious resentment, bordering on aggression, I know they need a change of environment. Outdoor time works wonders to break the hold that our devices have on us, so we’ll all head out for a game of badminton or a walk in the park, and let nature work its magic.

Of course, this only applies in my home. My parents love gadgets and they have game consoles, so the kids get to enjoy gaming when they’re over at their grandparents’ home. I see this as a treat, and a way for my kids to bond with my parents and brother. If my children are able to find common ground with their uncle over games, for instance, that’s a plus for me. It’s not about setting a hard and fast rule for technology, but ensuring that we remain healthy in body and spirit as we integrate technology into our lives.

As with all things, our children will be influenced by our technology habits. I check my phone frequently and my laptop is on all day, but I’ve taken steps to ensure that my own time spent online is meaningful. For instance, my 12 year old daughter is aware that I use Facebook primarily to read the news and to share articles with friends. I only follow the personal updates of a handful of closer friends. Similarly, on Instagram, I only follow a few friends, along with accounts that inspire me in some way, in relation to photography, writing, or creativity. Now that I’ve made these intentional changes to the way that I use Facebook and Instagram, they’ve become useful resources, instead of the time drains that they once were.

I’ve also shared my own work habits with my daughter. For instance, I rely on just one instrumental playlist from Spotify for work. When I have it on, it is a cue for me to ignore all other distractions, including my phone messages, and to concentrate fully on the task at hand. Occasionally, I’ll set the phone timer to ensure that I’m being efficient and not spending more than the time that I’ve allocated to a project—a major challenge when one is working from home. While my methods may not work for my daughter, I hope she will be inspired to develop her own good technology habits at a young age.