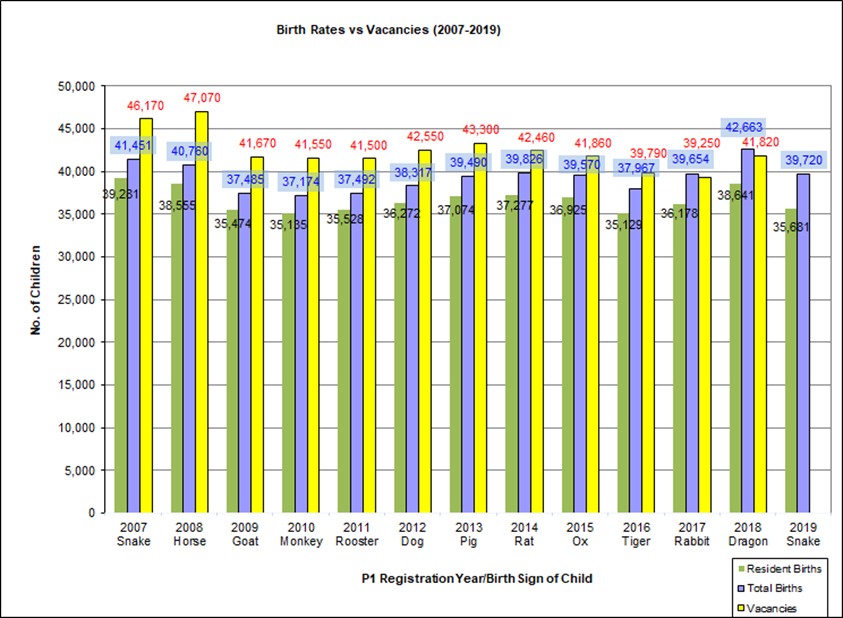 Updated 20 Feb 2019.  I’m back after half a year of rehabilitation.  Thanks for all the well wishes.

I’m in the process of redoing the Primary One Registration for 2018 due to my absence and have had much help from my friends and colleagues.
The first thing is the Birth Rates vs Vacancies chart for this year, 2019.  Parents are often concerned about the competition for places or vacancies available for the Primary One Registration in June.  Traditionally, the birth rate peaks during the Year of the Dragon.  For the convenience of parents, we have mapped Singapore’s birth rate data for the years 2001-2013.  Please note that the Birth Sign refers to that of the child due for registration that year, not the sign for the year.  So while this year, 2019, is the Year of the Pig, it is for registering children born in the Year of the Snake.  Our data is from the Department of Statistics.
As you can see from the diagram, there is a marked difference between this year (2019) and twelve years ago in 2007.  There is a drop of up to 1731 total births despite the government opening up the doors to foreigners for foreigners (https://www.population.sg/population-trends/demographics).  This shows that there is still insufficent locals for Singapore’s primary schools. The percentage of non-Singaporeans to Singaporeans (PRs+foreigners) is 38% back in 2017.
What is interesting is that from 2017 onwards, the number of places offered by MOE is LESS than the total number of child births!  This could mean that more children born in Singapore are now anticipated to study overseas.  Or it could mean that MOE is restricting the influx of foreigners in Singapore’s schools.  Several schools have been ‘merged’, reducing the total number of places available to candidates.
Citizens’ malcontent about the current state of affairs caused MOE to change its Primary One registration scheme to be more citizen-orientated less than a decade ago.  Now, Singapore’s citizens get absolute priority in nearly all Phases of the registration process, leaving foreigners to pray for a place in Phase 3.  Of course, if a foreigner has already got a child in primary school, the sibling gets to go to that school in Phase One if their ages differ by at most 6 years.  Other than that, it’s really difficult for foreigners to get any placement at all.

It is the year they

It is the year they start school, not the year of birth

but graph show is monkey?

Check out the Parents' Networking Groups

If you are looking for comments on the schools, just head over to the Parents’ Networking Groups for these schools.

P1 Registration for Next Year Intake 2015

If anyone, can give some comments on these neighbourhood schools?  Are they good?  E.g. Jing Shan, Mayflower, Townville?

Need some guidance before the enrolment.  tks.

The year above the zodiac is not the birth year, but the year that zodiac is going to register for P1.

erm, i think the Zodiac

erm, i think the Zodiac stated is wrong.. my girl is 2007 she is born under the sign of the pig.. not snake.. is the above correct?

However, kudos to Chief to really work all this out for us busy parents!!! thanks alot!

Was wondering if there is a

Do we have any statistics on the no. of pupils studying in Private International schools.

Looking at this year registration, there still to be very strong demand even for the lowest birth rate in Singapore history.

Hope that MOE has better planning than the poor HDB ‘s forecasting of new flats and carparking.

Hope I am wrong about this

hi Novena
I do not know why only some primary schools have open house. Perhaps these are newer schools and would like people to know more about them. Those schools that have been around for some time probably felt less the need to do so.
Typically, individual primary schools would advertise such events on their school website, some sent brochures to childcares in the neighbourhood.
We have a thread in the forum here which parents share such informations. Do check it out and share your information too.
http://www.kiasuparents.com/kiasu/forum/viewtopic.php?t=11382

Yes, totally agree with your point. But where can we find such statistics.

Y not much primary school having open house to newly parent for P1 student 2011??? any website to check abt tis?

Primary one registration for year 2011

There is still competition for popular primary one places, however the situation will not be that bad as compared to dragon year. I noticed the birthrate trend up for those born after year 2004, which mean more balloting.

My guess is those leaving < 1km will get to the school of their choce without ballot.

Hope every parent get their children to their choice school……

However we shouldnt forget the number of PR’s are increasing and this birth rate is only for Singaporeans.. whereaas PR;s are also eligible..

Babies take 9 months to come excluding time taken to conceive one.
Since baby bonus was introduced in 2004, its effect, if any, can only be seen in late 2005 and after.
I agree with busymom that SAR may have a part to play in the lower birth rates. Some parent may be worried of frequent visit to clinics if conceive then.

The drop in 2004 birth rate was probably a result of SARS in 2003.  While baby bonus was announced in 2004, it was announced in August.  It applies only to babies who are born after August.  Unfortunately, I didn’t have the foresight to plan for my daughter to be born in the later part of that year

However, the increase in birth rate in the subsequent years does indicate that the baby bonus has had some effect, albeit slightly.

Govt efforts to increase babies do not seem to have boosted take-up rate. The baby bonus was announced in 2004 but there seemed to be a surge in kids born in 2003.  My daughter is a ’04 child and will have to register for P1 this year.

It will be interesting to watch this year’s balloting, because the Govt just announced the news that children who are Singapore Citizens will get a double chance should there be balloting.

It will be interesting to know what is the proportion of boys and girls, based on available statistics, for each of those years, to make a better and more informed analysis.

Now have 5 Polytechnics in Singapore, I guessed should be more easier to get in. I remembered in the old days where there are just 2 polytechnics.So if every suject get C6 then 36 points means no places to go.

it seems that our

it seems that our government effort (ads,bonus, rebate) didn’t boost up the birth rate much.

High birthrate will only end up in more balloting, regardless of the vacancies.

For eg, my girl’s school does not go thorugh balloting.  But kids staying more than 2km have to go through balloting for the "Dragon" year cohort.

SO for parents who have kids born during high birthrate years, do have back up plans.

So if everyone go to their nearby primary school that mean that is places of everyone. No ballloting would be surfacing out in Phase 2C.

Interesting findings.  Now, any wonder why our Principals and headmasters are heading out of country to look for students? The classrooms are getting emptier.  So, imagine the poorer polytechnics empty in 2011.  That situation is very real, all the students go to the better polys leaving the weaker ones empty.  Solution is to look to China/India etc.

With the lower birthrates, would it also mean lower t-score to get into better schools, looks like it.  However, this is buffered by the foreign students also taking the PSLE (this years top student is from China!!), meaning we are slowly giving up our top places to foreigners.

Hm… the education landscape and our classrooms will certainly change very quickly.  Is Singapore going to become an education hub?  Looks like we are heading there.  But hey, we’ve got to make our system great ….

Don't forget that we are

Don’t forget that we are also catering to foreign students. It would be better if the no of  this group of students are also taken into consideration.

The principle must be that

The principle must be that the supply is always greater than the overall demand, else the policy of making complusory education for all eligible kids useless.

I guess it is more of the 2nd order issue, where parents want to get their child into a "better" or more conveniently located school.

My take is this type of "demand" will always be there as most parents simply want the best available means for their off-springs.

My bet is while overall supply always cater a buffer, the choice schools supply did not acutally increase but was actually due to more new schools or increases in the supply of neighbourhood schools where the town profile comprises new/growing families.