Teens who cut and mutilate themselves 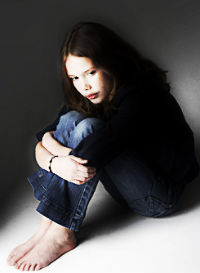 There are many underlying issues when someone goes around cutting/mutilating themselves. I used to teach in an all-girls’ school. These were my personal observations and experiences:

1. If they were cutting themselves in areas where the scars can be seen for eg on the wrists or palms, then its highly probable that they want to be ‘caught’ cuz its a way for them to cry out for attention for their suffering.

2. Then there are others who will mutilate their upper arms or their chests where the scars won’t be that visible. Most of them use a razor. They usually start off by experimenting and depending on their threshhold of pain initially, it might start of with a superficial cut and as they become bolder, the cuts increase in number and depth.

3. When questioned, one of them admitted that she could not voice out her feelings of distress, hence cutting was a way of expression. As weird as it sounds, the pain from cutting kind of ‘compensates’ from the emotional pain they are feeling inside.

4. Many of them, ironically, came from middle-class to well-to-do background. Unfortunately, not having a close relationship with their parents allowed this ‘activity’ to go undetected. I cite the case of a girl who lived in a double story landed property. Her father was a pilot who was away most of the time and her mother worked long hours. Her parents were also having problems in their marriage. This girl constantly sought solace in her room on the 2nd floor and resorted to such an act to find some sense of ‘release.’ Then, there was a foreign student who lived on her own and had relationship problems, which culminated in her cutting herself as she became depressed after it ended.

5. In so far in the years that I have taught, I don’t recall any of them admitting that it was a trend. But then again, as mentioned, these are my own personal experiences and observations.

So parents with teen or tween daughters (I cannot speak for the boys as I have not come across any), because this is the age where hormones are working overtime, there’ll be some form of angst, rebellion, being overtly emotional about issues etc…that will be evident from them. Do not dismiss this as some form of negative behaviour too quickly. Observe and listen. Most of the time, they might be throwing hints (may be deliberate too) that something is bothering them. It could be anything – a failed relationship, an unrequited crush, a fight with the best friend, not doing well in school, being constantly compared in school or at home, neglect by parents, affected by parents’ estranged relationship, not adapting well to the school’s culture, not able to make friends, being bullied etc… One example, though not related to mutilating, but the girl was having problems with her parents – she handed up a blank piece of paper with this statement "Why should I waste my f****** time writing a composition, I have better things to do." Though shocked and angered, I deliberately did not report her but rather, took the time to seek her out after school and had a long chat with her. Turned out that she had some issues with her parents and she was taking it out in her EL class. Hence, the importance of not writing off negative behaviour.

How can this situation be resolved?? One thing is for sure – the act of mutilating oneself will not ‘disappear’ overnight. Its something like a ‘disorder’. One fundamental advice – communication lines have to be OPEN. As parents, we have to sieve out nuances from them via verbal and behavourable analysis. They have to be approached neutrally, even though we may not be able to digest/accept what they are doing/may have done, because it is very shocking. And yes, if necessary, external help should be sought. Even then, they have to be monitered for some time to ensure that they would not return to their ‘old habit.’ In fact, in such situations, it is imperative that the school (esp the teachers) and the parents complement each other in trying to resolve this.

As a teacher, depending on my relationship with the girls, I would approach them or if I am aware that they are close to another teacher, I would request for help. Only after trying to weed out from them that they are engaged in such an activity, then I would contact their parents and then with their permission, engage the school counsellor. Sometimes, the girls would NOT want their parents to be informed (because of issues they have at home). This is the tricky part, because the parents have the right to know. I would inform the parents, but then request that they trust in us and let us help their child while they will be updated regularly. When such a situation arises, we will also then make a conscious effort to convince the girl that her parents have to know as they (the parents) want to help too.

Nice article. I agree especially on this part: 4. Many of them, ironically, came from middle-class to well-to-do background.

whatever the situation, I

whatever the situation, I don’t quite understand that nowadays teen.

Thanks, autumnbronze, for bringing up this issue to our attention. It could be the pressure that kids face these days, but during our time as kids, there were less incidents of kids committing suicide or mutilating themselves. Agree with you that communication between parents and kids is key. Apart from that, as parents, we should think about building up our kids’ resilience. How to do that is the tricky part, as every kid is different and has different temperament. I have seen some kids whose parents are the supportive type (i.e. not overly stressing the kids up), but yet the kids give themselves so much pressure/stress that I sometimes worry for them. Still do not know what parents should do in this case.

Hi jedamum, So should we

So should we continue to shield our kids from disappointment and hamper their ability to handle their emotions? It is indeed a fine line to tread. Besides being supportive parents, we should try to surround our kids with good friends, mentors, relatives, and encourage good siblings relationship. This is because despite having good relationship with parents, parents are sometimes the last person the kid will turn to in times of need.

However, when something goes terribily wrong with regards to how the kid turn out, it is not 100% the parents’ fault as most of the time, despite good parent-child relationship, it is the element of luck that will determine how our kid will turn out; what we can do is to keep our eyes peeled and be vigilant about the child’s physical well-being (eg while my relationship with my parents were never very close emotional-wise, my parents confronted me for every knocks or bumps i had on my arms and legs…they were that eagle-eyed

Thanks for conveying your input from ‘another perspective’

Yes, I do agree with you that it may not be 100% of the parents’ fault  when things do not turn out right, especially when the parents have tried their best in nurturing the child to the best of their ability.

I remember as in the case of the foreign student, her parents were working really hard in their home country so that they could put through all three daughters in Uni here.  It was one of her friends and her sister that highlighted her situation to me.  When I spoke to her, she revealed that being the eldest, she felt overwhelmed with responsibilities here (ie taking care of her 2 sisters, running the house etc ..) and was just devastated when her r/s with the boy didn’t work out and resorted to cutting as she could not possibly confide in her younger sisters, much less her parents, not because she couldn’t, just that she didn’t want to add to their burden.  I do remember her mother taking the first flight out here when informed of her daughter’s predicament.

So yes, sometimes its just circumstances/luck and how one’s perception of handling a certain situation that determines the eventual outcome.

Disorder or not, people who

Disorder or not, people who cut themselves during times of distress face one common problem : they have difficulty handling their emotions and expressing their feelings. I knew someone who though does not do it frequently, but did so once faced with deep emotional issues. Instead of channeling those negative feelings somewhere else, the presence of physical pain momentarily remove the emotional pain one is going through; once the physical pain surfaces, it signifies the receding emotional pain. These people see mutilating as a form of coping with disappointment and anger as well as growth (ie look back at the scars as a milestone in life).

So should we continue to shield our kids from disappointment and hamper their ability to handle their emotions? It is indeed a fine line to tread. Besides being supportive parents, we should try to surround our kids with good friends, mentors, relatives, and encourage good siblings relationship. This is because despite having good relationship with parents, parents are sometimes the last person the kid will turn to in times of need.

However, when something goes terribily wrong with regards to how the kid turn out, it is not 100% the parents’ fault as most of the time, despite good parent-child relationship, it is the element of luck that will determine how our kid will turn out; what we can do is to keep our eyes peeled and be vigilant about the child’s physical well-being (eg while my relationship with my parents were never very close emotional-wise, my parents confronted me for every knocks or bumps i had on my arms and legs…they were that eagle-eyed

Thanks for sharing. Its not

Thanks for sharing. Its not easy to be parents.

Thanks for sharing!  There can never be too many reminders to us parents that we must be there for our kids.  It is very important for their sense of security and love. Constant reminders for us to take heed and not to leave it till too late.

A highly insightful sharing, sista! Extremely well written and an apt mental note for i have 2 growing girls myself and one going on tweens. I agree wholeheartedly that parental support is the most important pillar in embracing the situation together. While i do not pray that my girls would one day go through such a phase (esp since i’m always here for them as a very active stay home parent)… i do find it is good for us to know aniwaes. Once again, thank you for this sharing.