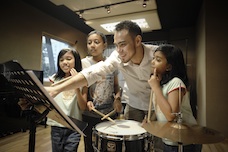 Learning efficiency increases if we have already experienced first hand the issues that courses are attempting to teach us. In the same way, as young adults, children also need the context of why they are learning something before they can fully appreciate what they are learning.  And the best way of getting context is to experience it for themselves.

Like most new parents, I have been guilty of sending my children for formal music courses at well established schools with only an abstract notion (or wistful hope) that they can pick up some music "sense".  These courses would invariably sit the kids (and parents) in front of the instrument while trying to get them to learn solfège, sight read and play music scores.  That is, after all, what we, as parents, have come to expect because that is what we think we paid for.  Unfortunately, not every kid can be little Mozarts, and after many unhappy episodes of threats and yelling in trying to make them practice at home, many kids would lose interest in the very thing we had wanted them to acquire. It is difficult to understand why one has to work so hard at playing some classical pieces just for an obscure exam.

I had tried both class-based and individual lessons for my 4yo daughter without much success. She was just disinterested in music lessons and it became a chore for us to try to get her to practice at home.  We had pretty much given up on her ever mastering any musical instrument when we heard of the newly set up The Little Arts Academy (LAA) down in PoMo (the fully revitalised ex-Paradiz Centre).  From its brochures, it promised to provide a multi-disciplinary arts curriculum including Music, Dance, Theatre, Visual Arts, Digital Media and Culinary Arts.

As we were looking for an alternative for my daughter’s ballet classes since her previous school had moved due to the renovation of Katong Mall, an all-in-one centre was a dream come true for us. The first visit sealed it for us. Occupying the whole of the 5th floor of the building, LAA is a sprawling, clean and brightly-colored expanse of pure kid fun. 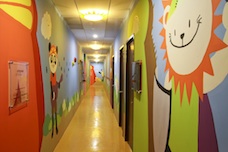 On both sides of a long corridor are rooms vibrating and oozing all kinds of kid-friendly activities. There was a kitchen for cooking lessons, classrooms for story telling, photography, art and calligraphy lessons, and music rooms and recording studios full of keyboards for guitar, drums, and of course, piano lessons. 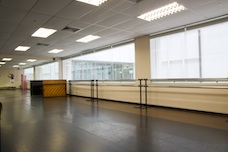 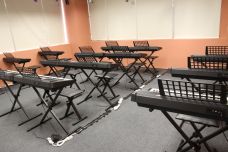 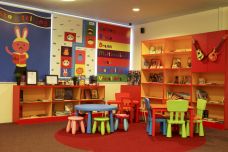 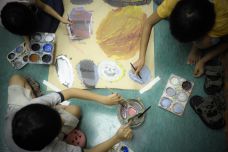 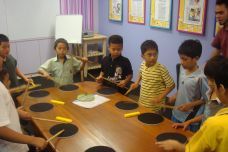 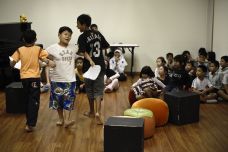 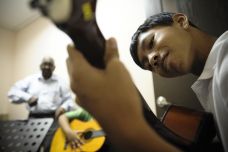 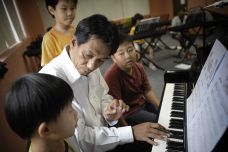 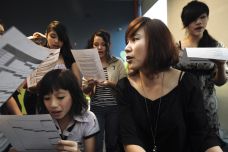 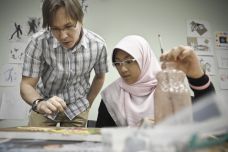 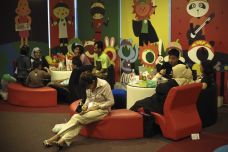 And it is parent-friendly too, with a large lobby, sofas and my favorite: 2 huge mushroom sofa couches for parents to rest our tired bums while waiting for our kids (assuming we behave ourselves, of course).  In any case, there are plenty of cafes for parents to park themselves throughout Pomo.

We signed up for the ballet lessons promptly, but were hesitant when it came to signing up for the piano lessons, given our earlier failed attempts. However, the draw of a back-to-back arrangement which allowed my daughter to attend the music lesson immediately after her ballet lesson was too much for us to resist, so we registered for that too.

It turned out to be excellent decision. As a not-for-profit outreach initiative by The Arts House (of The Old Parliament House), LAA is staffed with highly skilled, experienced and caring professionals driven by their passion to provide equal opportunity education in the arts.  It’s not about the money.  All their staff believe in the organisation’s goal of giving every child a stage to perform. That is raison d’être of performance arts.  The chance to perform in front of a large life audience is reason enough to motivate anyone to put in that extra effort in seeking excellence.

As a co-organiser of marquee events such as ChildAid and various performances and events at The Art House, LAA is not short of avenues for their students to exercise their talents. But what is most compelling is the noble vision of the organisation – that art is to be experienced and enjoyed by everyone, and not just the domain of the elite and the talented.  In the spirit of meritocracy, there is no lack of opportunities to shine for student in LAA who aspire for excellence.  Doors are always open to those who are willing to put in the effort.  The support from the Business Times Budding Artists Fund allows LAA to make this a reality. 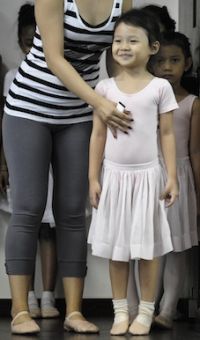 In short, my daughter could play about 5 complete pieces of children pop songs by the end of the 3rd lesson and she looked forward to playing them at home each day. She even had a mini performance at the World Book Fair at the end of 2 months with LAA. To us, that’s an amazing achievement given that she could hardly play her scales when she first started. For her ballet, she had performed at one of the YOG events in Suntec City, and also participated in Tollins, a LAA production held at The Art House last December.

No, my daughter is neither a music prodigy nor a natural-born dance talent. But the deep interest, pride and seriousness with which she conducts her training make it worth our effort of sending her for her lessons in LAA.  And the smile of pure joy and accomplishment that she flashes at the end of each performance is simply – priceless.

where is place. looks

where is place. looks impressive

Thanks, ANobleNerd and DesertWind… and for the record, I am not paid for the reviews I do under my blog in KiasuParents.com 🙂

I’m not interested in service providers that talk first about the payments and fees or dangle discounts to sweeten deals. We are not buying iphones or gadgets which have standard features and can be thrown away if spoilt. We are looking for people who can really make a difference in the lives of our children.

I’ve been scolded by my DD’s teachers in LAA for bringing her late for class. For that, they have gained my respect 🙂

Excellent, thanks Chief!  I will certainly check this out and hope to sign up my son for some music lessons too.  Thanks for sharing!

I love the environment of

I love the environment of LAA! I discovered PoMo and LAA when my son and I took up a cartooning class there for a term. PoMo is just a few minutes walk away from Dhoby Ghaut MRT station, so it’s a very centralised and convenient location.

There is a very energising buzz when you step into LAA; the walls and the sounds emanating from the various rooms just create interest in whatever’s being taught in the rooms. =)

ooh, i love the bright and

ooh, i love the bright and colorful wall murals! it’s kind of far for us but it’s soooo tempting!

Is SOTA A Good School For My Child? Hear From…

Art Is For Everyone