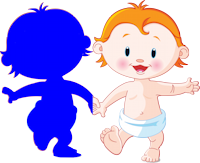 I brought a pregnancy test kit as my menses were 3 days late. Kiasu & Kanchiong me! The results was positive & i was jumping for joy. I text DH immediately. He thought i was playing a joke on him. My message to him: ” Congratulations. You are a father for the 2nd time. “

As i was still early in my 1st trimester, i decided to only make an appointment with my gynae at a later date but something was not right. I was bleeding slightly & i was worried. So a call to KKH was made & i was on my way to see my gynae.

During the scan, my gyane informed us there were 2 sacs which means i was having twins. And becos its 2 separate sacs, this means i would be having a pair of fraternal twins. My heart was jumping with joy. I cried, tears of happiness.

Alas, during the 2nd check up which was about 2 weeks later, my gynae noticed something different. One of the sac was empty, the other one was “occupied” with a tiny fetus, yes a baby.

He showed me the scan. Yes, we could see 2 sacs but only 1 was “occupied”. The other one was a total black, empty hole. My heart dropped. Where was the other baby?

At the 3rd check up, our suspicions were confirmed. The other empty sac has disolved back into my blood stream, hence no twins were involved. Only 1 & the only one.

I was devasted. What on earth could have happen? 2 sacs but only 1 baby…. Many questions ran through my mind… but no answer.

Well, at least i still have 1 perfect little one growing inside me, steadily & healthily. We looked forward to her birth. Year 2007, July, she was born.

4 months after her birth, DH & i were on holiday in Bangkok. I was in the shower when i felt something was not right again. I looked down & to my horror, i was bleeding from down there. Huge clots of blood dripped on the bath-tub. There was even 1 that was the size of a liver that you would buy from the market. I screamed for my DH.

We took the sample back in a container & showed my gynae. After some tests were done, my gynae confirmed that was indeed a miscarriage. But i shook my head. How can i be pregnant again, and its like only 4 months after the birth of DD… we did not have any sexual intercourse.

Both my gynae & us ran through all our records & suddenly it dawned upon us – could this be the so called twin i was supposed to have but was dissloved back into my blood stream, therefore allowing the other twin to grow.

This twin did not dissolved afterall. It was “hidden” somewhere but did not have the chance to develop. I cried buckets…. again questions begin to form in my mind… why why why… i kept asking myself.

My gynae did a little check on me to ensure i was clean inside. He told me there are still some clots inside me. Would i like to have D&C done or i prefer to miscarriage naturally? I chose the latter.

True enough, i was bleeding excessively the next month which of cos, coupled with some clots as well.

I went back to KKH again to “certified” i was clean inside.

Till now, whenever i see twins on the road, i would be reminded that I DID conceived twins as well. The other twin would be in heaven now, looking down happily on us & his/her fraternal twin, my 4 years old DD.

Hugs to you poppy! I can

Hugs to you poppy! I can totally understand how you feel. Like buds mentioned, things happened for a reason. Glad you have moved on although it’s not easy.

Things happen for a reason..

Things happen for a reason.. Sometimes we may not know or understand until it finally sinks in. In this case it may have been a situation where it wasnt meant to be. No doubt, there’d always be the what if questions left unanswered, rest assured your baby has left your side for a better place. I know the shocking feeling of bleeding excessively and the liver like thingy coming out of ya body. It crept me out at first cos I thought it was the baby but I suppose in my case it was determined to stay inside of me and wait to be born. Whatever it is.. We the women endure & undergo challenging times to have babies and that alone marks a morher’s sacrifice in the name of love. May the existence of your dd help mark the memory of the missing twin..

Just realised your kids are the same age as my 2 elder ones.

Thank you for all your comments, hugs & support.

A special thanks to each & everyone of u. I hv put behind that incident & moved on forwards… hey… its has been 4 years….

got to admit it was no easy task along the way…

A special thanks to DH for being there with me too. (though he will nvr know my nick in this forum..kekeke)

poppy, i can understand yr

poppy, i can understand yr sadness. it must be an emotional  trauma for u esp at the beginning…….but don’t be too sad , as u’re still blessed with the other twin.
look at the positive side, juz like what Carebear had mentioned, maybe the other foetus had defects which could not be able to develop fully….. if the child would to be alive, may be suffering even more……enjoy yr current motherhood !!!
Augmum Mon, 27/06/2011 10:10am

Wishes him/her happy in wherever they are now

Poppy15, tks for sharing. The agony of losing a child is terrible. It happened to me and til now i’m still wondering was it something that i have done that caused him/her to leave me. I guess i will nvr know.

Very touched to read the whole ordeal poppy… but like all said you must cherish what you have and must enjoy the motherhood.. maybe it was just destined!!

This is so touching, poppy.

This is so touching, poppy.

Hi poppy, whatever happened it is not your fault. It is the survival of the fittest, your DD2! The other fetus could have some genetic defect that was not compatible with life.

poppy sista, hugs and lots of

i know how you felt as i went thru the same thing. Just like what DS had said and sang, his mei-mei is "Somewhere Out There" 🙂

We should be stronger than our children.

Take care and thanks for sharing 🙂

Poppy, I fully understand how you feel. Been there too…but that’s another story….

Anyway, like what Luvkid said, having kids is all fated, not within our control. So don’t blame yourself. Cherish what you have now.

Very touching, poppy! Everything in life is predestined, so just take things easy. Whatever will be, will be… Take care!

poppy, Hugs, Hugs! I know it

Hugs, Hugs! I know it is difficult to pen down what you have gone thru! You did it! And remember, we are all here to cheer you on so take heart, my friend

Look on the bright side, it is not fated to come to this world.

Recently too many story from KSP forummers on miscarriage thingy, reali feel kind of sorry for u all….. Infact,i had a miscarriage too before DS2, but it was gone on the 6th week. I missed my regular menses initially, did a pregnancy test-POSITIVE,seen a gynae-confirmed pregnant. The following day, bleed like menses. Given 2 jabs to try to secure the foetus,yet still bleeding. Did a blood test, reading not to the foetus growth requirement. Finally,abort it. Of cos, i cried over it, but get over with it very fast. Always tell myself it is not fated to be mine, eventhough i might insist to keep it, it will not be healthy. I also suspect could it be a girl and we are not fated to have a girl…..Anyway,we are happy to have our current 3 boy…..

Put it all behind us. Cherish what we have noe and what we going to have in the future!!