What’s next after the O Level results?

Those sleepless nights and nail-biting moments waiting for the 2015 ‘O’ Level results are now over. Or are they? We know most of you are worrying about pre-U next.

Whether your child scored satisfactorily or did not perform up to your expectations, it is no use fretting over the Secondary 4 grades now. What’s more important is to consider with your child where he or she will want to study in 2016, which for many will mean either choosing the 2-year ‘A’ Level route in Junior College (JC) or a 3-year Diploma course in a polytechnic.

Generally, students enter Junior College to prepare themselves for University, whereas polytechnic graduates have the option to enter the workforce immediately or continue to further their studies.

In recent years, polytechnics have increasingly become a more popular pre-university choice. According to a Straits Times report in 2015, “the intake for the five polytechnics rose from 25,700 in 2010 to 26,879 in 2013.” Nevertheless, the same news report also highlighted the fact that “in the last seven years till 2013, JCs have maintained a yearly intake of more than 16,000 students.”

So will it be JC or Poly for your child? Here are some considerations to make before finalizing your decision in the Joint Admission Exercise (JAE).

How did your child fare in relation to this result? Are you expecting more competition for a placement in your preferred JC or Polytechnic from this cohort?

For admission to JC for a 2-year Pre-U course, students must obtain a less than or equal to 15 L1R5 (one language subject and 5 relevant subject) aggregate to apply. Those with a 16- to 20-point aggregate will be granted conditional admission, i.e. they have to re-sit for the relevant language and/or Mathematics papers by the following year’s ‘O’ Level exams.

What’s more, each individual JC have their own cut-off point criteria, as shown here from a screengrab from Page 117 of the JAE information booklet released by the Ministry of Education. For example, if your child’s raw L1R5 aggregate is less than or equal to 5, he or she can qualify for JCs such as National JC or Victoria JC. 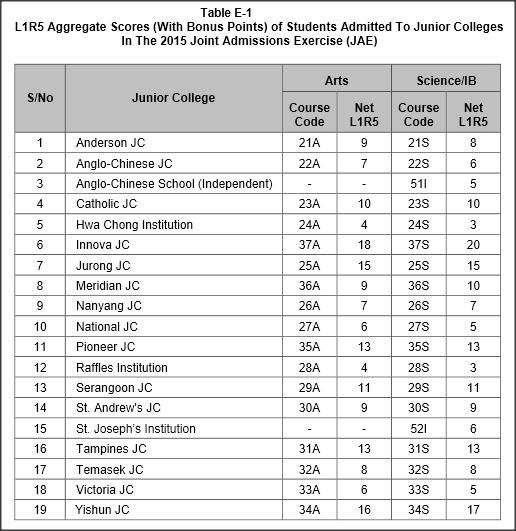 To qualify for admission to polytechnics, the net ELR2B2 aggregate score (i.e. English language, 2 relevant subjects and 2 best subjects) will be considered. For your reference, the lowest ELR2B2 point admitted for the Tourism and Resort Management course at Singapore Polytechnic was 12 in 2015, while Biomedical Engineering at Temasek Polytechnic required ≥15 points. Many polytechnic courses also require a minimum grade of 1-7 for English and Mathematics.

Pre-university can be considered an important crossroad for one’s future direction in life. In our highly competitive society, entering a ‘better’ or more reputable pre-university institution is still regarded as offering better prospects for the future.

Take Raffles Institution (RI) for example. For years now, the prestigious JC has produced graduates that go on to attend elite schools overseas or become top politicians in Singapore. According to a 2004 Wall Street Journal survey, over 40% of the 820 RI (then still known as RJC) graduates of 2003 were accepted by top U.S. universities. AsiaOne reported that out of 1,239 RI students who sat for the examination in 2013, 339 students achieved a perfect score of 90 for the University Admissions Score (UAS).

Based on the Ranking Web of Universities, Ngee Ann Polytechnic is currently the top polytechnic is Singapore and ranked No. 2242 in the world, so graduating from this polytechnic might also gain students better international recognition.

Furthermore, choosing the right course of study will be beneficial for the student when entering the working world. So if your child’s dream is to be a flight engineer, he/she should steer towards course such as aerospace engineering at say, Singapore Polytechnic. Also, polytechnics offer students a glimpse of the real working world through corporate internships before they graduate. In fact, we have even heard of companies that employ their ex-interns once they graduate from polytechnic, after seeing their potential and capability.

If your child excels in Humanities, he/she can consider studying humanities at JCs like Hwa Chong, Raffles Institution or Temasek, under the Humanities Scholarship Programme. Otherwise, if he/she has decided to make a career in pre-school education, he/she can consider a Diploma in Early Childhood Education at Nanyang Polytechnic.

Learning methods and other considerations

It is important to consider the character of your child and how adept at fitting in when choosing a suitable pre-university institution. Compared to polytechnics, which offer more practical learning, JCs focus on more theoretical subjects and give students the opportunity to explore the depth of a particular subject.

Kids who choose JC may tell you that they prefer the shorter 2-year route towards university. On the other hand, there may be those who opt for polytechnic as they do not like the perceived “mugging culture” or the strong emphasis on academics in JCs. Some have even transferred to a polytechnic after the first few months in JC as they could not cope with the arduous school curriculum. On average, a JC student spends 40 hours per week in school (for lectures, tutorials, practical), compared to 25 to 30 hours on campus for a polytechnic student.

Different polytechnics also cater to differences student profiles. For example, Republic Polytechnic is known for its problem-based learning approach which is very different from the way lessons are conducted at other schools. There, students learn by doing research and sharing findings. They don’t use textbooks; neither do they have teachers per se who will teach them concepts from standard lesson notes. So students who are independent learners and keen in research work may fare better there.

For more information on the Joint Admission Exercise, go to