Children who are Singapore Citizens/Permanent Residents, and

(a) whose parent or sibling has studied in the primary school of choice, or

Day 1 of Phase 2A(2) is over, and the good news is that no schools are confirmed to require balloting yet.  However, Henry Park and Ai Tong are both 95% filled.  The school to watch out for is still Ai Tong, as its TUR is still below its average TUR of 24% for Phase 2A(2).

What is noticeable is the hot TUR for Red Swastika today, which brought it into the 90% territory, displacing St Nicholas as the number 3 most contested school this year.  Fairfield Methodist and ACS Primary have also significantly increased their TUR, while Catholic High has eased a little.  Tomorrow’s numbers will finally decide if balloting will happen in any school this year for Phase 2A(2). 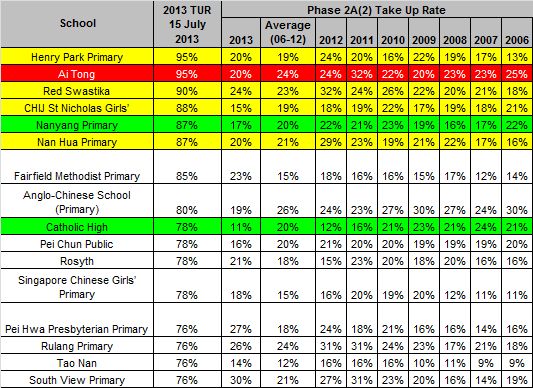 In response to parent’s queries, we have worked out the average take-up rates in Phase 2A(2) for the schools at risk of balloting in Phase 2A(2) this year.

While high, Henry Park is only risky if the TUR at Phase 2A(2) is similar to last year’s.  Otherwise, it should be safe.  This is similar for St Nicholas, Nan Hua and Red Swastika.

Nanyang and Catholic High should have a bit more breathing space.

However, all the above schools are very likely to have less than 10% of places left for Phase 2B/2C.

Phase 2A(1) has just ended.  In the past 7 years, this is mostly an uneventful phase for parents, regardless of whether they are participating in it.  This year, however, many parents who qualify for Phase 2A(2) and 2B are biting their nails, watching Phase 2A(1) anxiously, despite their relatively secure placement.

Parents have cause to worry, if they are hoping for a place in the following academic powerhouses:

All these schools registered the highest cumulative take up rates till Phase 2A(1) in the last 8 years.  If demand for these schools continue unabated in the next Phase, we could very well see the balloting in Phase 2A(2) for these schools, something that has been unthinkable for most parents in recent years.

At this point, parents should really start thinking about activating their backup plans if they are eyeing these schools.  Don’t leave things to fate.  Activate your Plan B so that you can sleep well in the coming days without worrying about having to ballot.  Success in Primary school is NOT contingent on getting into elite schools.

Any mummies can advise between the schools listed below, which is better school and how hard it is to get in? We are Singaporeans.

Have no idea what to expect.

Please can someone help.

I think it is best you check with Maha Bodhi on the matter.

My chils was born in Sri Lanka; he had his first batch of vaccinations in Sri Lanka till we moved to Singapore when he was 6 months old. This is not a problem as long as you have the records of immunisations from India. Email the local health book  with vaccination records as per instructions given at the following link

My view is u should qualify

My view is u should qualify for Phase 2A1/2.

hi,am applying for 2A2 for my ddand  my dd is up to date on immunization but it was all done in india as we go there very often and the doctor is a old very famous family doctor. will this be acceptable to the school??? someone please advise.

Phase 2A(2) are for the first child whose parents/siblings has studied and graduated from the school of choice OR parents is a staff members.  If all ex-students/ staff happens to have kids registered on this year, then you will see the contention.

If she remains as a foreigner

If she remains as a foreigner when she registers, she is only eligible for Phase 3.

My daughter currently holds a LT Dependent Pass. I am applying for a PR status for her, but is worried that it may not be approved by this time next year….

If you refer to MOE's rules

Application under Phase 2A2

I am a Singaporean and an alumni of Maha Bodhi School. However, my daughter holds a foreign passport. Would she be eligible under Phase 2A2?

My apologies as I am away from Singapore for more than 10 years but would certainly want my daughter to go through the main-stream education process in Singapore.

Thanks a lot for anyone who can enlighten me on this.