Phase 2B has ended.  31 schools are oversubscribed, with 2 schools meeting the quota exactly.

So this is good news for parents going into balloting for Phase 2B this year.  It generally means that a smaller number of parents will be disappointed.  Kudos to the schools and the Ministry for controlling Phase 2B applications and preventing it from overheating.

And as for Henry Park and Pei Hwa Presbyterian, the good news is that there is exactly enough places for applicants.  No stress there for parents at all!

Good luck to parents going for balloting on this coming Friday.  Remember that there is still a chance for you to try again in Phase 2C, even if you get balloted out, so don’t be overly worried.  We will be updating our analysis on Phase 2C very soon. 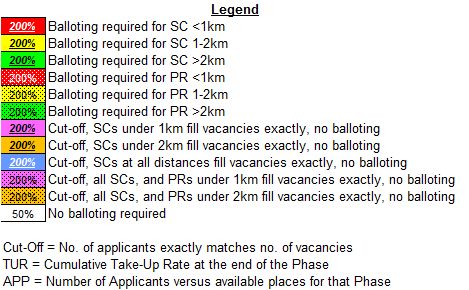 After the first day of the Phase 2B exercise, 19 schools are over-subscribed.  Fairfield Methodist leads the pack with almost 2 applicants to 1 seat.  CHIJ SNGS, Nan Hua, and Yu Neng, all of which had balloting at Phase 2A(2), are also over-subscribed as expected.

The odd one out is Henry Park, which only saw 65% of its 20 seats taken up.  Hopefully it will remain so tomorrow, but that is a highly unlikely event.  Don’t count on Henry Park having any places remaining in Phase 2B this year.

The table below shows schools which have an application (APP) rate above 50% for Phase 2B.

With Phase 2A(2) almost complete pending balloting at only 4 schools, it is time to look at the developing scenario for Phase 2B.

Given the new ruling, Phase 2B now has at least 20 places for qualifying children at all schools, which is good news for parents vying for popular schools with strong alumni connections.

For our analysis this year, we will look at the number of places available at each school for Phase 2B, and compare that against the number of applicants for the same Phase last year.  This will allow us to identify schools with the highest risk of over-subscription should the take up rate in Phase 2B this year be similar to 2013.

25 schools are identified to have deficits ranging from 1 place to 29 places (1 whole class).  These schools are marked red in the table, and will most likely face over-subscription in Phase 2B this year.

For the 5 schools over-subscribed in Phase 2A(2) this year, parents who did not succeed in that Phase will likely try again in Phase 2B or 2C if they qualify.  Along with the perception that popular schools have more places available in Phase 2B and 2C now, it is our belief that this will actually generate greater competition in the later Phases, especially Phase 2C.

Hi , Just to check on what trigger the balloting exercise for 2b or 2 c phase . Is it when the total application exceed the no of slot. eg 50 place but there 54 application. Should be yes. what about the distance and Citizen or pr critelia ? is it  the citizen critelia is first consider  than follow by distance. right ?

So if within 1 km is fully over subscribe . than the balloting is conducted for the applicant who is in the 1 km range.

The rest of the applicant which fall out of the 1 km range,  can consider another school or wait for the next phase. ?

Does anybody has any feedback about PLMGS? Thanks in advance.