General comments and chit-chat, or tell us how we can improve KiasuParents.com
Post Reply
121 posts

Monica on IG: nicholas lim does not deserve to be bullied on the internet 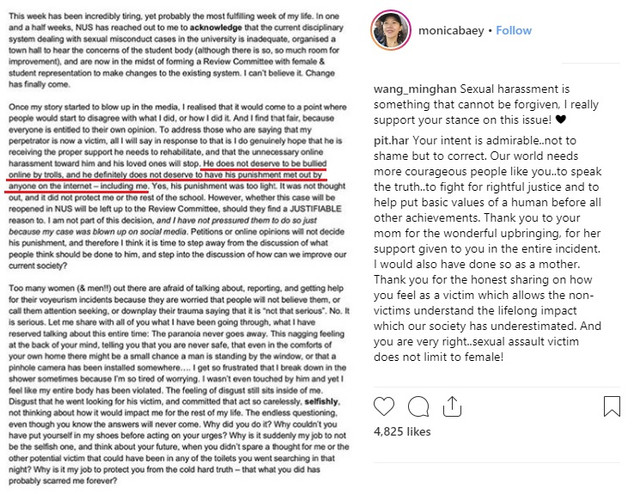 Another peeping tom. We need to be alert all the time.
Top

annielovesboogeydog wrote: ↑
Thu May 02, 2019 3:10 pm
Monica on IG: nicholas lim does not deserve to be bullied on the internet

that happened really because everyone including Monica think the punishment is too light!
Top

A third Peeping Tom incident has been reported at the Nanyang Technological University (NTU) in as many weeks.

A WhatsApp message circulating among students and seen by The New Paper said the latest incident happened at about 10.15pm on May 1 in the women's toilet on the third storey of Hall 4 in Block 22.

An NTU spokesman, replying to TNP's queries last Friday, said it is investigating the incident, which was reported by a student.

"Our pastoral care team has been providing support to her since the incident," he added.

TNP understands that no police report was made.

The alleged culprit is believed to have used it to peek into the cubicle.

The NTU spokesman said several security measures were in place to prevent such incidents.

"Access to female toilets in all halls is through key fobs," he said. "In addition, there are CCTVs in common areas. Campus security officers patrol the residential halls and are told to check that all toilet doors with fob access are securely locked."

A third-year student who did not want to be named told TNP that the use of key fobs for all the doors had only recently been implemented.

"When I moved in two years ago, not all doors needed key fobs to enter, at least for my hall then," said the 25-year-old.

"I think because of a few peeping cases in guy's toilets, my hall started making sure that all the doors needed a fob to access."

He felt such incidents would continue as the punishments are not harsh enough.

"But I know the school did try its best to prevent people without key fobs from entering our toilets," he said.

The Straits Times reported on April 18 that a police report was made against a 22-year-old male student from Tamarind Hall who had allegedly filmed a 20-year-old female student showering in the residences.

Three days later, the police received a call about a 19-year-old man who had allegedly taken photographs of another man in the shower in Hall 3. NTU said the suspect was neither a student nor an employee there.

Voyeurism in on-campus residences gained public attention recently after National University of Singapore student Monica Baey, who was filmed while showering, express her frustrations over how the authorities had punished the culprit.

In response, NTU said it had a zero-tolerance stance against sexual harassment.

It said it had strengthened its policy and procedures governing harassment in January and plans to introduce anti-harassment online modules in July in its orientation programmes.
Top

I still feel the 23 year old peeping tom should not get away with just a warning and skipping a semester.
he is old enough to think of the consequences if he dared to commit.
cases of molest, upskirt pics and other sexual misconducts on the increase.
if NUS allows 2 strikes and you are out, there will be more sex perverts who will get away.
what happens if these perverts misbehave again? there will be more victims suffering. what if the victims are young kids if perverts become teachers?
Top

Sex offenders will be liable for their actions even if they are university students, Law and Home Affairs Minister K. Shanmugam said yesterday.

Addressing questions on sexual misconduct in university campuses, he told Parliament that the police take a balanced approach towards such cases.

"Some have been prosecuted. Depending on facts, others have been give a second chance. There are no 'free passes' to university students, or for anyone else," he stressed.

The question of whether student sex offenders were treated differently was raised online after National University of Singapore (NUS) undergraduate Monica Baey, 23, complained on social media that the student who filmed her showering in a campus residence had got off lightly.

Explaining how the police and Attorney-General's Chambers (AGC) approach such cases, Mr Shanmugam highlighted situations where leniency was exercised or not.

The six autonomous universities received 56 reports of sexual misconduct by students in the past three academic years, starting from 2015/16, he said.

The victims in 37 cases made police reports. Two cases had insufficient evidence and four are still under investigation.

Of the remaining 31 cases, 16 were prosecuted in court, with 10 resulting in jail sentences and four with supervised probation. One case was given a discharge not amounting to an acquittal, and the convicted offender in another case is awaiting sentencing.

Of the 15 cases not taken to court, two were given a stern warning. The other 13 were given a conditional warning, meaning that if they commit another crime during a stipulated period, they will be charged with both offences.

Only one of the 13 cases given a conditional warning went on to commit another crime - an NUS student who was warned for a voyeurism offence in 2015 and re-offended in 2017. He was prosecuted in court for both offences and sent to jail for eight months and fined $2,000.

When a woman's privacy is violated, follow-up actions must ensure she is treated with dignity and respect, with her concerns addressed and support given to her, he added.

Mr Shanmugam also stressed no leniency would be shown in such cases where the offender masked his face, covered closed-circuit TV cameras or used other means to evade detection.

Education Minister Ong Ye Kung, who also fielded questions on the issue from MPs yesterday, said 14 of the 56 cases had occurred off campus.

Noting that two-thirds of the total cases were related to voyeurism, such as Peeping Tom incidents and filming of people in vulnerable positions, Mr Ong emphasised the need to tackle the growing concern of voyeurism.

Calling for the universities' disciplinary processes to be "stringent but fair", he said: "We need to better balance the objectives of deterrence and redress for the victims against the rehabilitation of the offender.

" (This) is important for an education institution, but it should not end up with penalties that are too soft and too lenient."

Mr Ong noted the number of cases for each university is closely related to student numbers, with the 25 in NUS and 20 in Nanyang Technological University making up the bulk of the 56 cases.

The universities also carry out their own disciplinary processes and mete out a combination of penalties, including official reprimand that will be reflected in a student's educational record, suspensions and expulsions.

Of the 56 cases, five are pending hearings and four students quit before sanctions were imposed, Mr Ong said.

Of the remaining 47 cases, 34 were officially reprimanded, 26 suspended for up to two academic terms, and 20 banned from entering students' dormitories.

He said that while "two strikes and you're out" cannot be applied across the board, expulsion must also not be the default for all forms of misconduct.

"We must ensure that potential offenders know the severe consequences of their actions, including the impact on their future," he said. "We should always refrain from trial by media, doxxing and resorting to mob justice."
Top

As if peeping Tom in nus / ntu not enough, now got peeping drone

this good looking fellow also do such thing