Getting your child into that dream Primary school is just the start of a 6 year journey. Discuss issues you face with supporting your child's studies in Primary schools.
Forum rules
Gentle reminder before posting questions in the Academic Support Forums: Please ensure you post your question in the correct thread. Try not to start new threads.
Post Reply
1533 posts

The above is exactly what minister would like to hear/read and I'm glad one more person has been convinced.

MOE wants kiasuparents to stop promoting P1-2 enrichment because there won't be any more assessments.

I was really thinking of 3 types of bright P1-2 kids:

a) Those who may not have the means to go for early headstart. You know, the lower income kids. Some of these underprivileged kids are shy/reticent/reserved, and not necessarily vocal/curious/enthusiastic like kids from more educated families. Hope their teachers are able to sieve them out using their new qualitative descriptors in P1-2 so that such deserving kids can continue to receive their EMB. Currently, kids who did well in the school's weighted assessments get EMB if their household income is below $6.9k (?)

b) There is also another group of very high ability kids who are frequent 'troublemakers' or 'noisemakers'. They certainly do not seem curious, cooperative or diligent enough to teachers, by the rules of convention, that is. In fact, their enthusiasm may be perceived as interruption/disruption in class. Will teachers still nominate these kids, despite their good showings in non-weighted mini tests in P1-2? Without any indicative benchmarks or tangible recognition, some 'troublemakers' may not know they're actually very strong and continue to stir trouble in the ensuing years. I noticed some personality changes in some bright kids after they had a taste of going up the school podium to receive their trophies. They stopped misbehaving after they discovered they're the toppers. But now, the younger batches may no longer know because everyone's blind-folded and gagged.

c) The last group I was thinking of is similar to pupils in (b). The ones with some disorders. Some may not utter a word in class, but can we conclude they're less than enthusiastic and curious, as compared to the other rules-abiding pupils? At the other end of the spectrum, we also have some who aren't cooperative (collaborative), e.g. roam around the classroom, roll on the floor or yell the whole house down. But I know some autistic pupils can be very bright as I saw them receiving Best in Subject X during our prize giving ceremonies. Won't these poor kids be getting any Edusave award anymore? They must be recognised in other ways too, not continue to live in oblivion that they're not good enough.

How about the existing ECHA? What is the difference between ECHA and EMB now? Isn't ECHA supposed to be given to the obedient but not necessarily academically strong kids?
Top

Hi, if I am in an independent school and am under EESIS, am I still eligible for Education Merit Bursary? And when are recipients notified? Thanks!
Top

smolbean wrote:Hi, if I am in an independent school and am under EESIS, am I still eligible for Education Merit Bursary? And when are recipients notified? Thanks!

Maybe not eligible for EMB. 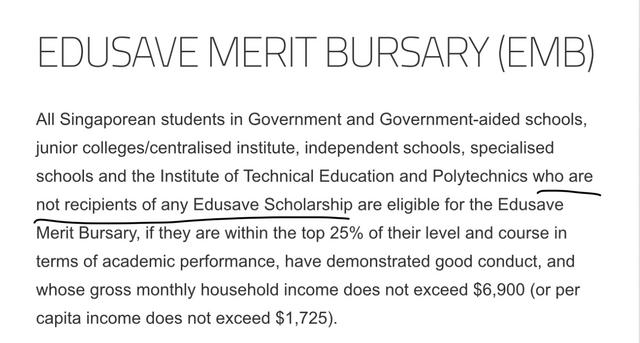 What are the criteria for EAGLES award? Do all Gov school nominate their students for this awards, or up to individual school?
Do Secondary one student have a chance for this award if he/she is class chairman and CCA team leader?
Top

Hi am I right that for all P5 & P6 kids who are top 10% of their cohort in school will receive Edusave scholarship award? Thanks
Top

Should be yes and applicable to Singaporean with good conducts
Top

yqyq wrote:Should be yes and applicable to Singaporean with good conducts

Just received the edusave merit cert for top 25% for my P2 son. Happy to tell him his efforts have paid off!
Top

decollette wrote:Just received the edusave merit cert for top 25% for my P2 son. Happy to tell him his efforts have paid off!

Hello , have any of you ( secondary ) review any Edusave awards? For secondary students ?
Top
Post Reply
1533 posts