Is there life after O/A-Levels? Definitely! How well a person does in tertiary education is correlated with job opportunities open to the person. Discuss issues pertaining to nstitutes of higher learning here.
Post Reply
314 posts

slmkhoo wrote: ↑
Sun Mar 20, 2016 9:11 am
I don't think most people have a better/worse opinion when comparing whole universities. But the emphasis or electives offered, even in the courses which are offered by more than university, will differ, and the assessment requirements etc may also differ. Some employers may prefer one over the other. At the end of the day, though, it's the assessment of the applicant by the employer that matters most, rather than whether the degree is from NUS/NTU/SMU etc.

I agree. For me, I would look at the course structure and see which one suits me best.
Top

Hi parents
Can someone explain the difference in these two courses:
NUS - BBA(Accountancy)
NTU - Bachelor of Accountancy

Are both courses similar? I always thought that the accountancy course was only offered by NTU.
Top

Grandyma wrote: ↑
Sat Jan 12, 2019 11:53 am
NUS Cimmunication Studies in FASS recently hit the news:
- TODAY had reported that there were eight resignations in as many months.
- Almost the entire administrative department, numbering at about five, also resigned as they found it difficult working under the new head, former lecturers told TODAY.
On top of that, there are changes to the curriculum.

You know SKang1234 from WKW? He's covering Reddit. Also part of your NYJC's IB. Sorry you've to talk to parents in kiasuparents.com, who are mostly in their 40s and 50s. Reddit crowds are better. Mostly youths.

Is this social media influence thingy part of your undergrad project? Or you kids are just feeling restless because nyjcmememachine was shut down? Endorsed by NYJC Principal?

Listen up, kid, I think you kids must have some ethics. You shouldn't discredit the other JC Principal's hard work just to sway the innocent public to join your former JC. Won't you put your Principal in a spot and may make the two of them feel quite awkward?

I now understand why you cannot interpret graphs and understand what the uncles and aunties are talking about. You're an Arts student. When your JC has a lot of people (70%) scoring As in Math/Science and 50% in Humanities, all the data will bunch up on the right, resulting in a fat tail and negative skew. Hence, your Median is typically higher than your Mean, per statisticians' theory.
Last edited by obm on Mon Mar 11, 2019 9:25 pm, edited 1 time in total.
Top

Son got invited to this coming ntu high tea with president, does this invitation opens to jc2 only or includes those who have gotten their a level results ?
Top 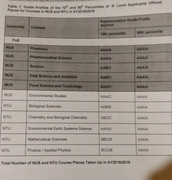 If the score is BCC/B, choice becomes limited.
Top

This is only for Faculty of Science.
Top

This is only for Faculty of Science.