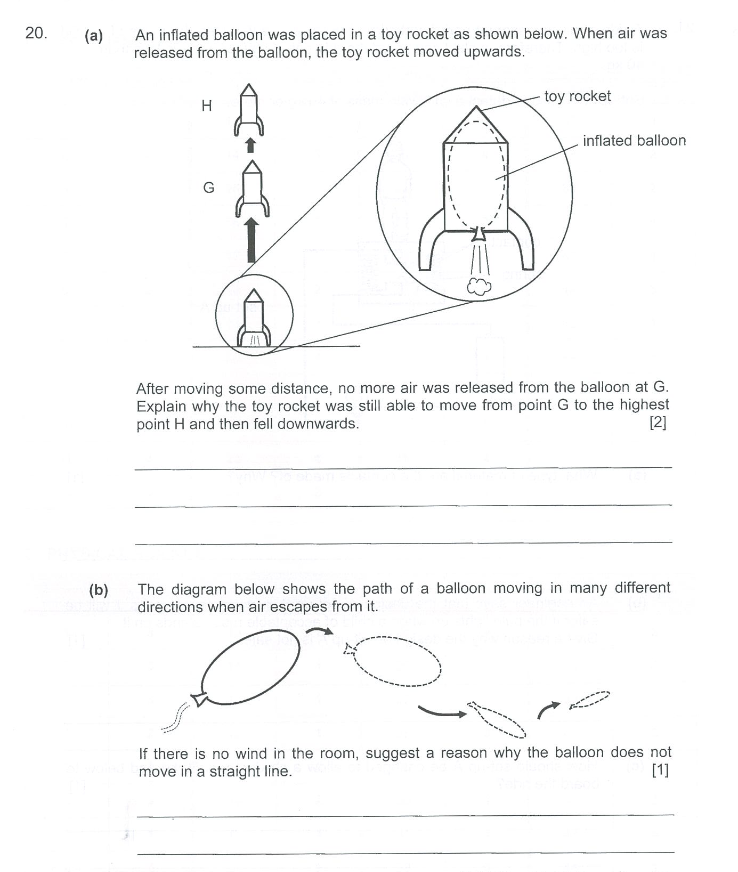 Please help how to answer (b).

Any idea, parents?  I googled for answer but they seemed too difficult for P6 child to understand. a)  The pushing force caused by the exiting air in the balloon, causes the rocket to reach until point H. The toy rocket can continue its ascent, even after the air  is not expelled at point G, due to the earlier push, that can help it to reach point H, but not beyond that.

b) The balloon is light and its movement is very much influenced by the exiting air and the surrounding air friction. Hence it cannot move in a straight line as opposed to the movement  of rocket that has a streamlined body.

Another possible reason, could be that the nozzle/opening of the balloon is flexible and when air exits, it vibrates and changes the direction of the exiting air. This alters the pushing force acting on the balloon causing the balloon to change direction.

20b) is why balloon flies in all direction. Reason is it does not have the aerodynamic enclosure of the rocket body.

The above is my suggested answer. Not the examination’s, so may be zero mark.

Thank you all for your response.

Consider the airflow from the balloon mouth as the propelling force for the balloon to move around. The direction of this force does not lie in the same surface as the gravitational force of the balloon, resulting in the balloon moving in a circular path.