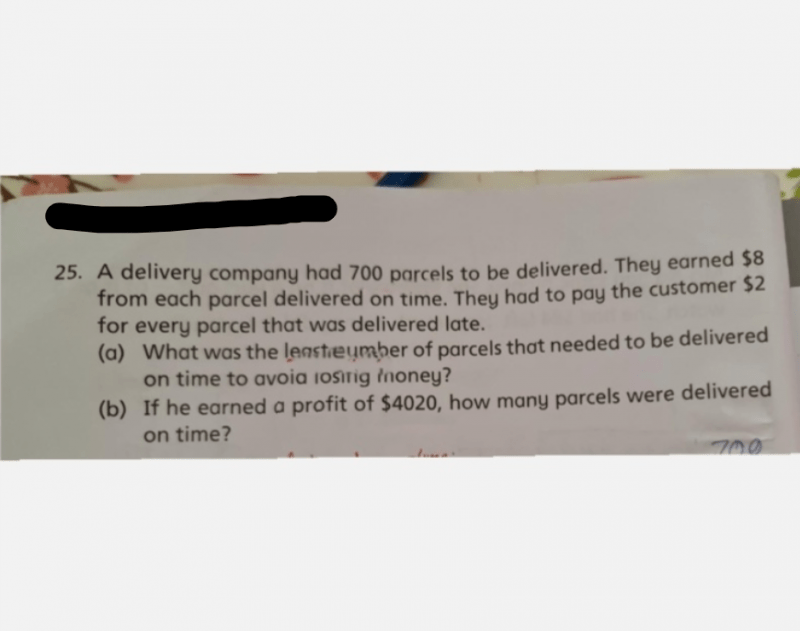 Can someone help to solve this ? Thanks

For every parcel delivered on time = + $8

Form an equation with the information provided in the question:

Hence, the least number of parcels which needs to be delivered on time is 140.

Hence, the least number of parcels which needs to be delivered on time is 140.

In this case, Method 2 seems to be easier, but it’s also because the numbers are “nice” in a sense where 8 is easily divisible by 2. If the numbers get larger or aren’t going to be divisible, Method 1 should be the go-to method, but I’m not sure if P5s would have learnt Algebra.

This should be the method which most schools teach. Find a random number and start working from there. In this case, parcels on time should be >500, since 500 x 8  is 4000, which is less than the profit in the question, so we can start with a number like 550. Subsequently, compare the total profits and adjust the numbers accordingly.

By guess-and-check, 542 parcels were delivered on time.

This method was taught to me when I was in Primary School and I loved it, and never had to resort to guessing-and-checking, which would sometimes be time-consuming. This method requires a bit of understanding to work, so if you can’t grasp it then you can just rely on guess-and-check.

If you take a look at the last three rows of our guess-and-check, you can see that by adding one parcel on time and removing on late parcel, we’re shifting the total profit by increments of 10. This number actually comes from 8 – (-2) which is the profit difference between a parcel on time and a late parcel.

Keeping this in mind, we can start by assuming that all the parcels were delivered on time.

Now, we know that the actual profit isn’t 5600, because for every late parcel, we have to deduct $10 from this total. (You lose the $8 you would’ve gotten, plus you incur a $2 penalty).

These type of questions are really popular; sometimes they might say there’s a total of x legs on a farm which has cows and chickens, then you need to find out how many of each type there are etc. so if you can understand Method 2 well and practice it proficiently, then it’s an advantage you will have in your exams, because it’s less time-consuming than trying out various numbers.

Thank you so much and appreciated that you take time to explain and provide me with few methods.

It really helps alot for me to explain to my DS.